What a finish for Daniel Romanchuk! pic.twitter.com/tdEmYKfxCt

US Athletes With Disabilities showed their strengths at the 2018 NYC Marathon on November 4th. For those not familiar with the race, or the entry process, AWD (Athletes With Disabilities) is a non-guaranteed entry unless you meet specific eligibility requirements such as being a member of the NY Road Runners Club and Achilles International or part of a team such as Team CAF (Challenged Athlete Foundation).

When asked by GQ what muscles he focuses on instead of glutes, hamstrings and quads which most runners target, Daniel replied

“For us, a lot of shoulders, wrists, and forearms. Those are our main concerns. Going around in a chair all day and then transitioning into a racer wheelchair to work out in, there’s so much stress on those joints and those muscles. We definitely want to keep those well-maintained and healthy.”

The categories for the race other than runners are Pushrim Wheelchair, Handcycle, and Duo.  Duo Team is defined by NYC Marathon rules as” pushing an individual with a disability; an able-bodied person (the Pusher) may be allowed to “push” a person with a permanent disability (the Pushee) in a customized wheelchair, specific for outdoor road racing, provided both team members meet … event registration and pairing requirements. 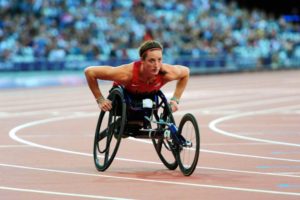 Daniel Romanchuk of the USA celebrates his first place win in the Wheelchair Division during the 2018 TCS New York City Marathon on November 4, 2018 in Central Park in New York City. (Photo by Elsa/Getty Images) 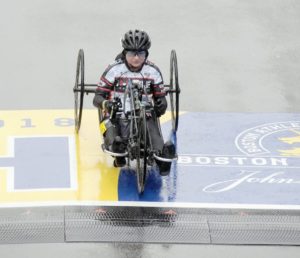 In the Handcycle Women’s category, Devann Murphy crossed the finish line first at 2:30:05.   January 20, 1991, at the age of 11, she was diagnosed with osteosarcoma of the right femur and hip and told she had six weeks to live.  Her parents were told to bring her home, make her comfortable, and plan her funeral. They refused to listen and sought a second opinion, then a third. After almost 18 months of intense chemotherapy, a 12 hour operation in which her right femur was removed and replaced with a cadaver bone and steel plates and her right hip was removed and pelvis fused, an additional 14 surgical procedures, including one in which her right fibula was removed and grafted over the femur fracture site, and months of physical therapy, Devann announced:

In the Men’s Handcycle category, Dennis McGorty came in second at 1:38:18   Paralyzed from the waist down after his bicycle was hit by a truck near his house on the way back from a long ride, McGorty continues to regain not only his physicality but his will to compete again. McGorty got his handcycle from the Challenged Athletes Foundation. He races to raise money for the Christopher and Dana Reeve Foundation. 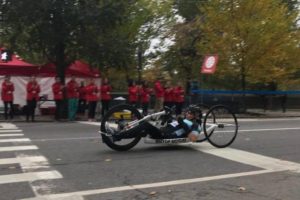 “Cycling was such a big part of my life and to be able to do it again in some form is great- not just for the sport, but for the camaraderie of cycling.” – Dennis McGorty

“I hope to inspire people when they see me run and challenge them to go after things that seem unachievable,”  When I face a challenge, I look for ways to overcome it. I see the possibilities, and that keeps me going.” – Adriele Silva 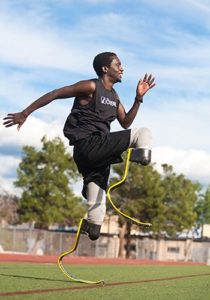 Another athlete on Team CAF, Marko Cheseto, who lost both feet due to severe frostbite in Alaska, completed the TCS New York City Marathon in two hours, 52 minutes and 33 seconds.  Marko is also a Paralympian and Ossur Ambassador.

Another member of Team CAF is Edie Perkins.  At 47, Edie isn’t the same marathon runner she was before she was hit by a car as she was riding through an intersection, with the light, in April of 2017 and the crash crushed her spinal cord at the T5 vertebra and paralyzed her from the chest down. That was last year, this year she finished in 2:43:20 and is believed to be the first woman to complete the NYC Marathon both as a runner and a handcyclist.

“I like to put myself in positions where I’m a little afraid and then overcome it. It gives me a sense of accomplishment. The same way seeing progress and improvement does. Progress is motivating. Progress in fitness, in beating race times, getting up the hill faster, seeing your body get stronger. All of that.” – Edie Perkins 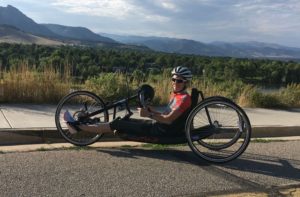 These are some of the inspiring athletes competing in this year’s New York City Marathon.  To see all the results, visit tcsnycmarathon.org.

We thank them all for discovering their strengths and inspiring others to do the same.  Regardless of their time to the finish, they are all winners!