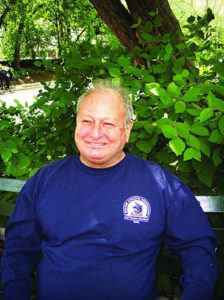 In 1965, Dick Traum, 24, was filling his gas tank at a gas station when the car behind him jumped forward and crushed him between the 2 cars.  As a result of his injuries, his right leg had to be amputated.  In 1976,  Dick found himself out of shape and approaching middle age.  He decided to do something about it – he joined a YMCA and began running, small distances at first and building up to miles.  By the end of the year, he became the first amputee to successfully complete the New York City Marathon.

The experience brought a strong sense of achievement and self-esteem. In 1983,  Dick created the Achilles Track Club, now called Achilles International, to give that same life-changing experience to others with disabilities.

“Somehow, I wasn’t upset. When you lose a leg, there’s no ambiguity. You get an artificial leg and keep going.” (IMDb Mini Biography By: woodyanders) 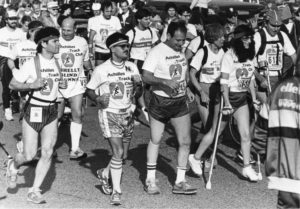 Dick completed 11 marathons on that prosthetic but in 1999 he had to have his left knee replaced and doctors advised him to use it sparingly.  Never one to give up, Dick switched to a handcrank bike and that became his racing vehicle.  He’s done 25 marathons in it. 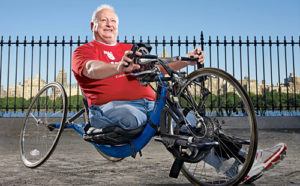 Six members of the club completed the New York City Marathon in 1983.  The club grew throughout the US and the world.  In 1984 a Vermont chapter of the Achilles Track Club was founded while the first international chapter was founded in New Zealand the following year. 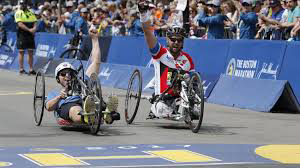 Another Achilles team member, Richard Whitehead, from England, has run over 70 marathons.  He has a double through-knee congenital amputation. When interviewed after the race by Laura Behnke, ABC Sportscaster,  Richard was asked “What has running done for you?”  His response:

“Running gives you the freedom to express yourself.  Whether you’ve got a disability like myself or whether you’re just looking to challenge yourself, running enables you to have the same platform to do that.”

Today, non-profit Achilles International has chapters and members in over 65 locations within the United States and abroad. Every day, in parks, gyms, and tracks all over the world, Achilles provides athletes with disabilities with a community of support and free athletic training. Able-bodied volunteers and disabled runners come together to train in an environment of support and community. Runners gain measurable physical strength and build confidence through their sense of accomplishment, which often transfers to other parts of their life.

Over the years, Achilles has developed specialized programs for children, teens, adults and veterans. Achilles Kids provides training, racing opportunities, and an in-school program for children with disabilities, while the Achilles Freedom Team brings running and marathon opportunities to veterans who suffered trauma while serving in a branch of the United States military, predominantly those who served in Iraq and Afghanistan. The Central Park Achilles Kids Workouts seek to bridge the gap between Achilles Kids and the Achilles Adult Workouts – as children mature they want to take the next step and focus on running as their sport of choice. The Central Park Achilles Kids program focuses on running competitively while keeping its members engaged through positive reinforcement.   There is also an Achilles Para-triathlon Team which expands the running program into biking and swimming and a signature race Hope & Possibility which takes place in several cities worldwide. 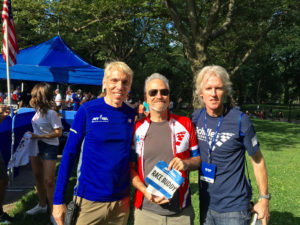 In line with the mission of Achilles International—to enable people with all types of disabilities to participate in mainstream running events in order to promote personal achievement— the 4 mile Annual Hope & Possibility race in New York’s Central Park, held on June 25th of this year,  included athletes of all abilities, giving handcyclists, wheelchair athletes, and mobility-impaired athletes their own space on the starting line.   Jon Stewart, a supporter of Achilles International, joined the race as a Race Buddy.

“While our programs focus on running, the truth is, running is simply the tool for accomplishing our main objective to bring hope, inspiration and the joys of achievement to all.”

To learn more about Dick Traum and Achilles International,