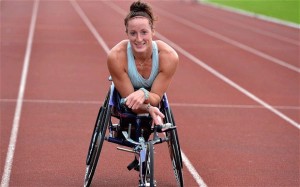 “Sports is my passion, paving access for others is my purpose”

Born in St. Petersburg, Russia, in 1988, with an underdeveloped spinal cord resulting in paralysis below the waist and a hole in her spine, a condition known as spina bifida, Tatyana was left untreated for 3 weeks before doctors operated.  Only her innate strength of will kept her alive.

As an unwanted disabled child, Tatyana was immediately sent to an orphanage after her surgery.  With no wheelchair to get around in,  she spent the first six years of her life using her arms as legs and walking on her hands.

In 1994, Debbie McFadden, working as the commissioner of disabilities for the U.S. Health Department, visited Tatyana’s orphanage on a business trip. When she met Tatyana, she immediately felt a connection with the young girl and decided to adopt her and bring her to the United States.

For Tatyana the adoption meant freedom, it meant a real family, and it meant her first wheelchair, but the excitement was short lived. When she arrived in the US she grew very sick. She was severely anemic and grossly under weight and doctors thought she would only survive a few more months. For a second time in her short life Tatyana’s innate strength would defy the odds.  (http://www.tatyanamcfadden.com/biography.html)

To aid in her recovery Debbie began to enroll Tatyana in various youth sports groups. Tatyana began taking swimming lessons at the local pool and, a year after she arrived in the US, began participating with the Bennett Blazers,  a Baltimore, Maryland area wheelchair sports organization with the motto “Teach kids with disabilities that they can before they are told they cannot”.

Tatyana quickly found she could use her innate strength to excel in athletics. She tried every sport she could find from archery, to ping-pong to basketball, but from 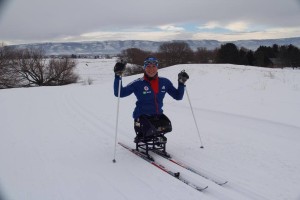 the start she fell in love with wheelchair racing.  At the age of 15, she was the youngest member of the USA track and field team at the Athens Paralympic Games, her first international competition. She shocked the world in the process, winning a silver medal in the 100 meters and a bronze in the 200m.  Two years later she won the gold medal in the 100m in world record time at the 2006 IPC World Championships in Assen, Netherlands.  She followed that performance with two silver medal performances in the 200m and 400m, securing a spot as a “Beast” in international wheelchair racing at the 2008 Beijing Paralympic Games, where she came home with 4 medals.

“When someone writes ‘disability’, they should cross out the ‘dis’ and just keep the ‘ability,’ because I think that everyone is able to do something.”

McFadden crossed the Boston finish line several hours before the two explosions, which killed three people and injured more than 170, and watched on television from her hotel as the horrific events unfolded. (http://universalsports.com/2013/04/19/boston-champion-mcfadden-a-shining-example-in-london/)  She has reached out to the families and victims.

“It’s important as an elite runner, an elite runner with a disability, to be a role model for those who are newly injured and it’s important for me to be an advocate for them.  I go to hospitals, I go to schools, I go everywhere just to talk about disability and rebirthing life. I’ve lived with many challenges in my life, every single day and so I know something, of what it’s like.”