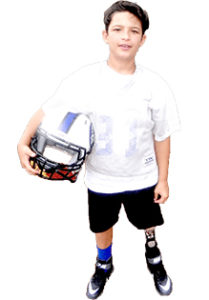 Jumping on a family trampoline seemed like innocent fun for Josh Piperato back in March of 2014 – until his leg got caught.  Initially diagnosed by ER docs at a local hospital as a sprained ankle, the pain rapidly became disproportionately severe and he developed a fever that reached 108 degrees.  Back to the hospital,  the next diagnosis was compartment syndrome – a painful condition that occurs when pressure within the muscles, such as from bleeding within the muscle,  builds to dangerous levels. This pressure can decrease blood flow, which prevents nourishment and oxygen from reaching nerve and muscle cells. If not treated within 6 hours, permanent muscle and/or nerve damage can occur.

But 6 hours had already passed – “Joshua was unconscious and in a coma,” his mother, Ana Piperato, said. “He developed blood clots and his heart was failing. He was developing water in his lungs. He was so sick. I knew in my heart something was seriously wrong. I thought Joshua was gone”

They had to amputate Josh’s left leg from just above his knee in order to save his life.

“He was depressed,” Ana Piperato said. “He wouldn’t eat. He didn’t want to do anything.”

After recovering from the injury and surgery, Josh underwent intense physical therapy at the Children’s Specialized Hospital in New Brunswick, where he was fitted with his first prosthetic leg.  Once he got used to the new leg, he began to feel more optimistic about his future – he wanted to ride a bike again.  And, with much effort, he did!

From that point, he was unstoppable – fitted with a running leg, Josh began running with his mom at night. “It was amazing. It [running] felt really good,” said Josh.( theobserver.com)

“He was gone with the wind,” Ana Piperato said. “Watching him run, well, it felt like he was alive again.”

Riding a bike and even running is one thing, but then Josh wanted to do even more. He started watching football with his dad, Chris Piperato, and practiced with his friends, who encouraged him to join his school football team.  He asked his mom to sign him up for the North Arlington Junior Vikings program.  Ana waited a while to see if he was really interested and ready.  Finally she signed him up for the 2018 season.  He was now 11 years old.

“No one is going to take my dream away.” 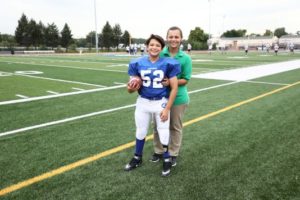 Jay Leiner, coach of the North Arlington Junior Vikings program since 1979, never dealt with a player with a prosthetic and did some research on rules and laws first.  He found out there was nothing to prohibit Josh from playing.  He soon found out that Josh had the heart to play the game and the talent as well.  “The leg is not holding him back. He’s running, tackling and blocking.”  Taking Josh’s leg and instability into account, he decided to place him on the offensive and defensive line which turned out to be perfect for him.  “If he gets hit, he bounces right back up. He’s definitely motivating the rest of the team. He pushes the rest. He’s running laps and the others are trying to keep up with him.”

“Watching this kid actually stick it out is amazing and really inspiring.” 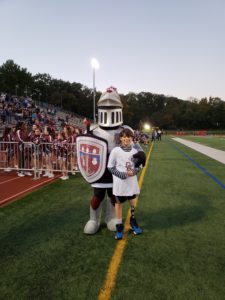 Last month, Josh was a special guest and honorary captain of the Don Bosco Prep football program, tossing the coin at the start of the game and winning!  “This kid is amazing,” said longtime sports photographer Dave Rubel, who brought Josh’s story to the Ironmen. “How can you not be impressed by his courage?”

Joshua Piperato – an inspirational 11 year old athlete and amputee – filled with determination and a strong “Can Do” spirit.