The PyeongChang 2018 Paralympic Winter Games are taking place between March 9 and March 18th this year, featuring up to 670 athletes, a 24 per cent increase on the 539 athletes that competed at Sochi 2014 with a 44 per cent increase in the number of female athletes. Athletes compete in 80 medal events across six sports:  cross-country skiing, biathlon, ice hockey, snowboard and wheelchair curling.

In 1944, at the request of the British Government, Dr. Ludwig Guttmann opened a spinal injuries center at the Stoke Mandeville Hospital in Great Britain, and in time, rehabilitation sport evolved to recreational sport and then to competitive sport.

On 29 July 1948, the day of the Opening Ceremony of the London 1948 Olympic Games, Dr. Guttmann organized the first competition for wheelchair athletes which he named the Stoke Mandeville Games, a milestone in Paralympics history. They involved 16 injured servicemen and women who took part in archery. In 1952, Dutch ex-servicemen joined the Movement and the International Stoke Mandeville Games were founded. 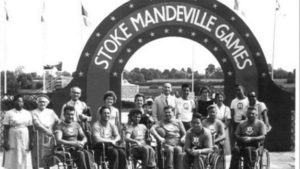 These Games later became the Paralympic Games which first took place in Rome, Italy in 1960 featuring 400 athletes from 23 countries. Since then they have taken place every four years. In 1976 the first Winter Games in Paralympics history were held in Sweden, and as with the Summer Games, have taken place every four years. Since 1992, the Games have taken part in the same cities and venues as the Olympics due to an agreement between the International Paralympic Committee and International Olympic Committee.

The Games are organized by the International Paralympic Committee (IPC). Founded on 22 September 1989 as a non-profit organization, the IPC is based in Bonn, Germany and aims to develop sports opportunities for all people with an impairment from the beginner to elite level.

‘To enable Para athletes to achieve sporting excellence and inspire and excite the world.’

Paralympic Values – the Mission of the IPC

Courage – Para athletes through their performances showcase to the world what can be achieved when testing your body to its absolute limits.

Determination – Para athletes have a unique strength of character that combines mental toughness, physical ability and outstanding agility to produce sporting performances that regularly redefine the boundaries of possibility.

Inspiration – As role models, Para athletes maximize their abilities, thus empowering and exciting others to participate in sport.

Equality – Through sport Para athletes challenge stereotypes and transform attitudes, helping to increase inclusion by breaking down social barriers and discrimination towards people with an impairment.( Learn more about the IPC at Paralympic.org/ipc.)

The US led all others with a total of 36 medals

Watching these games can leave you awestruck and inspired by the dedication and endurance of all these athletes.  Medals are the icing on the cake – the competition and the self-confidence exuded by all makes each event a special experience.  We congratulate all the athletes!  You are all Winners!

To learn more about the Paralympics and Team USA: