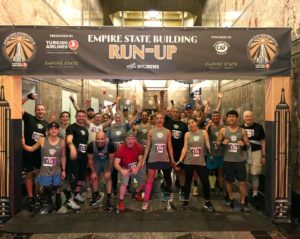 The  41st Annual Empire State Building Run-Up is the first and most famous tower race in the world, challenging runners to race up its famous 86 flights – 1,576 steps, a vertical distance of 1,050 feet.  The 2018 ESBRU took place on Wednesday evening, February 7th, sponsored by Turkish Airlines and joined by the Challenged Athletes Foundation.  CAF is the world leader in helping people with physical challenges lead active and healthy lifestyles and encouraging independence.

More than 200 people from around the world raced up the 86 stories to the famed observation deck. The CAF runners fundraise to help raise awareness and much-needed donations so people with permanent physical challenges gain access to adaptive sports equipment, athletic training, an active lifestyle, community and mentorship.  Each CAF runner raises a minimum of $2500 for the charity.

Among the #TeamCAFAthletes runners were Tara Butcher and Brandon Butcher. Tara and Brandon, both lost limbs in separate life-changing accidents years apart. Tara had her leg removed in 2005 after she was struck by a vehicle on a California highway. She quickly got involved with the Challenged Athletes Foundation upon recovery, calling it the force that “catapulted me to being an athlete.” She was not as serious a competitive athlete as she is now prior to her involvement with CAF.

She says CAF has provided her with several grants for expensive running prosthetics, and offers a “supportive community” that has helped launch her into new athletic challenges.

Tara’s approach is to “not think about” the height of the Empire State Building, nor how many stairs she is climbing, because “that’s kind of how I go into things.” Instead, she has turned her focus to building endurance, saying,

“I know I can do it physically… and I know I’ll go in there, put my mental game on, and I’ll just do it… I’m more of an endurance athlete. I know I can go for a long time. I’m just going to do my best.” (ABC News)

Brandon Butcher suffered an accident while working on a solar panel installation job in Utah. A co-worker was sliding off the roof, and Brandon lunged over to save him, falling and injuring himself in the process. He had his leg amputated as a result of that injury. 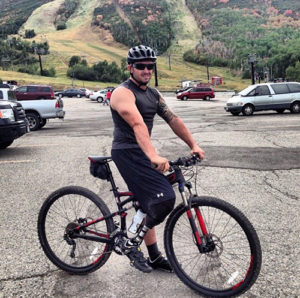 He says it was “tough for me to try to get back to where I was because I had based my life so much and I prided myself so much on my physical ability prior to it.”

Brandon saw how much CAF had done to help Tara and became involved with the charity. The foundation provided Brandon with a grant for a mountain bike, giving him an opportunity to try a new sport and return to a competitive, active lifestyle.

In preparation for the run-up, Brandon trained on a Stairmaster as well as his bike. He does not expect to compete with his sister. Rather, he just hopes the two of them will “be an inspiration to others.”

His full active life began with swimming and then running and by 15, he had won a Gold medal in the 2004 Paralympic Games breaking world records in swimming. Rudy made equally impressive showings at the 2008 and 2012 Paralympics, consistently breaking his own records and adding another gold, silver, and bronze medal to his collection.

Rudy is a spokesperson for the Challenged Athletes Foundation, helping adaptive athletes find their strengths through sports.

“I love to lead by example. My mission is to show people the real disability in life is a negative attitude” (ABC News)

To all the athletes taking on the great challenge, and to those providing support and encouragement to them, thank you!  You are all Inspirations!