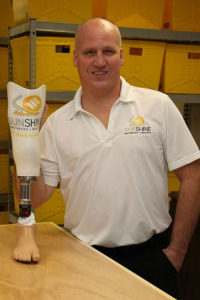 Rich Romaine was a professional carpenter, having a passion for shaping and fitting wood for functional and practical purposes.  After graduating from Cedar Grove High School, he continued his education at the County College, taking classes in building and carpenter architecture.  In 1991 he and his brother started their own carpentry business.

Then in September 2009, Rich fell off a roof, shattering and breaking his back.  He spent the next 3 months in a body cast.  Defying the odds of his back healing, he was recovering well, except for his left foot which was also shattered.  After 12 surgeries, he was still unable to walk on that foot.  Not wanting to live on pain pills,  Rich decided to have a 13th surgery, this time to amputate.  In September 2012, three years after the accident, he became an RBKA – right leg below the knee amputee.

Through a friend of Brooke Artesi’s brother, he came to Brooke for his prosthesis.  Brooke was just opening Sunshine Prosthetics and Orthotics and Rich became her first amputee patient.  She fitted him with his socket and leg and still retaining his carpentry skills, he began to help her set up her new office, taking an interest in the equipment.

Impressed with his interest and skills, Brooke sent Rich to prosthetic tech classes and began taking him to P&O shows to become familiar with the latest technologies and innovations.  In 2014 he officially became a Sunshine P&O employee – Head Fabrication Tech. 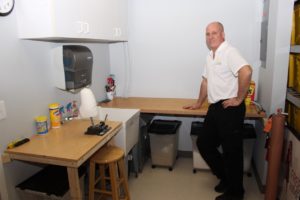 Rich now works part time at Sunshine,  spending his other days  teaching people about amputee life –  volunteering in hospitals to speak with new amputees, attending support groups to offer advice and answer questions and works with handicapped people training in adaptive crossfit.   He still finds the time and energy to be a Boyscout leader and to hike, camp, exercise with cross fit and aims to take up ju jitsu.

Rich lives in Flanders NJ and is father to 2 sons, ages 17 and 19 who are his inspirations.  He credits them with his motivations and his motto:

“Live life the best you can”

Rich currently has plans to finish courses and exams to become a Certified Building Inspector.  He wants to make sure people are safe in buildings built by others.

For his determination, his compassion and his outlook on life, Rich is our Inspiration!