We love the spirit of the Rio 2016 Paralympians – persistent, determined, motivated, dedicated.  Here are 3 of Team USA medal contenders to watch.

Born with familial spastic paraparesis, an inherited disease whose main feature is progressive stiffness and contraction (spasticity) in the lower limbs,  as a result of damage to or dysfunction of the nerves.  His mother has the same condition but whereas it did not impact her until her late ‘40’s, Evan’s progression began at age 3.  The muscles in his legs and back did not grow.  It hindered his walking but by age 11, he found that the pool was his haven. He developed exceptional upper-body strength as he learned to drag himself through the water.

“That’s just the easiest way that I can control my swim meets mentally. If I just sit there totally serious the whole time, I’m going to start getting between my ears, and that would have a negative effect on my races. If I can laugh and I can have a good time and separate myself from my race up until it’s time to get behind the blocks, then that’s what I’ll do.”

After his Paralympic debut in London, Evan felt he needed to distance himself from the distractions around him in Indiana and so, after many discussions with his family, he moved to the U.S. Olympic Training Center in Colorado Springs to make swimming the top priority in his life.

“If I was going to make a serious run at the Rio Games, I needed to take my training a little bit more seriously, so why not go to the place where that’s the focus every single day that you get up?”

The full U.S. Paralympic Swimming Team roster is made up of 31 athletes, including 17 athletes with Paralympic experience who have won a combined nine gold, eight silver and 12 bronze Paralympic Games medals.

16 year old Alexa Halko  qualified for the Rio de Janeiro 2016 Paralympic Games when she broke a world record at the U.S. Paralympic Team Trials for track and field in June. She finished the 800-meter race in 2 minutes, 1.83 seconds, breaking her own T34 world record by a second. (http://www.teamusa.org/para-track-and-field/athletes/Alexa-Halko)

“When I got the world record I was stunned. After so much work, I couldn’t believe I did it.”

Her day is filled with training and lots of arm work. She gets up in the morning and goes to swim training at the neighborhood pool until 9:30 a.m. In late afternoon she does a workout at the track, unless she trains on the 7-mile trail near her home.

She hits the weights hard on the weekends, putting extra effort into upper body and triceps training.

“I also work on pacing a lot. I’m working on staying through the end of the race instead of dying out in the middle.” (http://www.teamusa.org)

Alexao said the dream of getting to Rio began seven years ago at a farmers’ market in Edmond, Oklahoma.  The Greater Oklahoma Disabled Sports Association approached her and invited her out to participate in some of their events. There, she started with wheelchair basketball and picked up wheelchair racing, a sport she’s never lost focus on ever since. It’s what pushed her since she first got competitive, it’s what pushed her through training without a partner, through trail rides and dip workouts and getting up in the summer for those early-morning swims.(http://www.teamusa.org/para-track-and-field/athletes/Alexa-Halko) 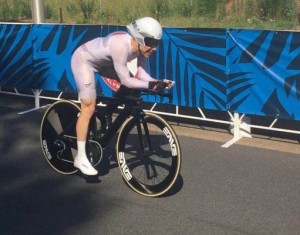 Billy Lister was diagnosed with an AVM at the age of 15. Arteriovenous Malformation (AVM) is an extra blood vessel in the brain that is dangerous if it ruptures and can hemorrhage. He underwent Stereotactic Radiosurgery to correct the abnormality. The surgery was a success in eliminating the AVM however he experienced swelling in his brain which led to rapid loss of function on the left side of his body. The daily hours of intensive physical and occupational rehab had been helping him make gains towards a full recovery.

Then, in 1999, he had a stroke which caused him to lose his ability to perform simple tasks such as type on a keyboard, button his shirt, open a door; and then ultimately the ability to walk or run.   Within 4 weeks he had slow regressive paralysis, which led to permanent paralysis on the left side of his body.

In  2009 Billy discovered the world of disabled sports and it re-lit the passion for life and athletics he had as a child. He found that theTriathlon really opened his eyes as to what is physically possible with enough determination and hard work. He attended a Paratriathlon camp for the Challenged Athletes Foundation in 2011 and got on a bike for the first time since his stroke. After this event, he returned home to teach himself how to ride again.  In 2013 he fully dedicated his training to the sport of Paracycling, wearing an Allard ToeOFF® brace and a modified bike. (http://getbackuptoday.com/teamup/billy-lister/) (Sunshine Prosthetics & Orthotics can custom fit this AFO) 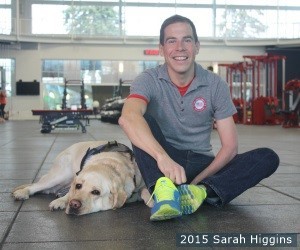 Billy Lister hangs out with his best friend, Potter, as they celebrate International Guide Dog Day at the U.S. Olympic Training Center in Colorado Springs, Colo.

“Seeing the accomplishments and dedication of my fellow para-athletes is immeasurable in terms of inspiration and influence.”

Billy’s best friend is his service dog, Potter.  Potter carries things for him and takes the load off of his only functioning arm and hand.  He can also open doors, call for an elevator, open the refrigerator and generally takes the stress off of Billy.

We’ll be watching you in Rio Billy!

One comment on “Paralympian Spirits – more to watch in Rio 2016”