Meet 3 more of our amazing, inspiring Paralympians – all heading to the Rio 2016 Paralympics! 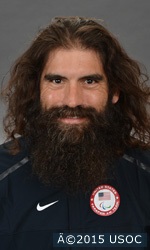 Joe Berenyi is a 47 year old track and road cyclist.  He won gold, silver and bronze medals plus set a world record at the 2012 Paralympic Games held in London after only 3 years of national cycling experience.

In 1994 Joe lost his right arm and left kneecap in a construction accident and decided to put his bike away after several years of successful amateur cycling races.  In 2007 he decided to join some of is neighbors for a ride and his love of cycling was reignited.

Joe was named the United States Olympic Committee (USOC) men’s Paralympic Athlete of the Year in 2015.  He was nominated for an ESPY in 2015 in the Best Male Athlete with a Disability category.

Joe and his wife Jill have three daughters, Sydney, Gwen and Tatum.  They live in Aurora Illinois.

AcroVelo is a documentary series that profiles people who have dedicated their lives to cycling in one way or another. The fourth installment follows Joe Berenyi as he takes several medals at the 2015 Paralympics Track Cycling National Championships. (Music by Leanne Bowes)

40 year old Jamie Whitmore started racing in off road triathlons, dreaming of the day when it would become an Olympic sport and she could fulfill her dream of standing on the winners’ podium.

She excelled at off road triathlons, competing professionally and winning the Xterra championship. She racked up more championship wins than any other male or female with 37 wins, earning six U.S. titles, two European Tour titles and a World Championship. She was known as one of the all time greatest Xterra racers. Her goal was 50 titles, more World Championships, then shifting focus for the Olympics in Mountain biking.

Then, at 31, cancer halted her course.  It was a rare form of cancer which caused a grapefruit sized tumor to grow out of the sciatic nerve sheath.  Her left foot was paralyzed.

“Fighting cancer is another story. It is a 24hr 7 days a week battle with no break. All of your time and energy goes into beating it!”

Jamie’s  paralysis prevented her from returning to racing as a pro athlete.  Then there was the arrival of the twins ! “a huge blessing but life altering again!”

One day her husband, Courtney, was talking on the phone to Bob Babbit (Challenged Athletes Foundation) who brought up the Paralympics.  “When Courtney relayed the message to me my eyes lit up.  The dream wasn’t over . . . just a little different . . . even better!” 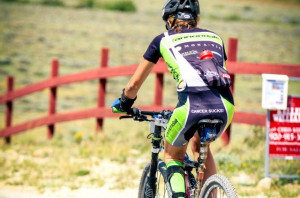 Jamie wears an AllardusaToeOFF® leg brace for paracycling. (Sunshine Prosthetics & Orthotics can custom fit this AFO.) When not competing, she’s also a coach and motivational speaker.

About a year and a half after the accident and after his rehab, Bryan tried several different adaptive sports, including tennis and fell in love with it.  He transferred to the University of Arizona which has adaptive sports programs and teams which compete on an international level and became serious about collegiate-level wheelchair tennis.  He graduated with his masters degree from there and is now a coach and mentor of that UA wheelchair tennis team as well as the wheelchair rugby team. 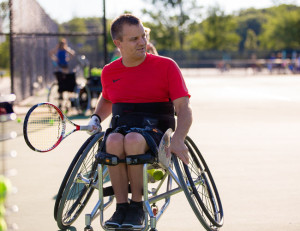 After narrowly missing the Beijing 2008 Paralympic Games, Bryan briefly retired, but returned to training and ultimately made the London 2012 Paralympic Team.

Living an active life, his hobbies include traveling, spending time with his wife, family and friends, motor sports, football, basketball, and camping.

Paralympians – their determination is our inspiration! We’ll be watching them in Rio – (NBC Schedule Sept. 7-18)