When Daniel Ennett, of Canada, was five years old, he was stricken with meningococcal septicaemia — a combination of Meningitis and Sepsis, a life-threatening complication of infection. It led to the loss of both his arms and legs. Facing and surpassing challenges became his norm.

Now 22 years old, Daniel is a psychology major and sociology minor  and the University of Alberta.  He chose his curriculum because he likes figuring out the motivations and justifications behind people’s actions.

The U of A Specialized Support and Disability Services (SSDS) provides support by allowing him to do most of his schoolwork on his home computer and laptop so that writing isn’t necessary.  They also provide him with textbooks in PDF format so page flipping through a paper textbook is eliminated.

Daniel’s “go for it” spirit wanted more than schoolwork, he wanted to urge disabled people to get out of their comfort zone.  He was approached by Fred Kroetsch and Kurt Spenrath is broadcast of Open Sky Pictures on Telus Optik TV.  They asked him to  become the host of the Telus tv show and YouTube series and explore the challenges faced by people with disabilities.  He is now the host and adventurer of “Invincible.”  In the first season he was painting at the Nina Haggerty Centre for the Arts — an open Canadian community funded art institution that accommodates those with disabilities.  He also interviewed a quadriplegic homicide detective and engaged in active sports like swimming and sailing. 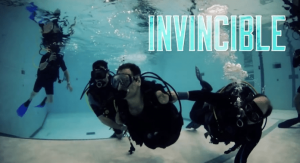 The second season of the show mainly challenged him to take part in more sports activities such as skiing, dancing, and scuba diving.

“It’s a very surreal experience, especially because I don’t have a lot of control down there. I have no way to properly equalize because you have to plug your nose to do that, so I was relying on someone else to help me equalize, which was super sketchy.”

The show continues to Season 3 and Daniel is determined to get his scuba diving certification as well as sky dive.

After completing his indoor course, Daniel headed to Florida to scuba dive in open water, his first trip outside of Canada. During his stay in Florida, he notes that he was glad to find disability accommodations readily available. This is one of the goals of this show, to find disability friendly sites and encourage the understanding of needs and motivations of people perceived as “disabled”.

The next challenge he takes on is diving with sharks

“It’s always a guess as to what they are going to throw at me tomorrow. But there’s nothing really preventing me fear-wise.”

In an article in the University of Alberta Faculty News (“Breaking the stereotypes of disabilities”) by Donna McKinnon, Daniel said that he doesn’t believe that managing his disability makes him inspirational.  He feels that people underestimate the ability to overcome trauma.

“ [People] think that a devastating event will be even more devastating than it is, when in reality humans are very adaptable.”

We look at “inspiration” in the Merriam Webster sense –  it’s something (or someone)  that makes someone want to do something or that gives someone an idea about what to do or create.

Daniel Ennett is an inspiration, not only because of his adventurous spirit, but because he takes a serious look at accessibility and adaptability issues in his travels and in his show and perhaps this will encourage people to think outside the box of what their options are to be active.

“I wasn’t really aware of a lot of things that are available to me. Just the sheer amount of things disabled people can have access to.”

Check out our Resource page to find some organizations which help and encourage the physically challenged awaken their adventurous spirit.