Sgt. Kirstie Ennis entered the Marine Corps at the age of 17, planning on a  20-year-long career in the armed forces. She knew from the beginning that she wanted to work on helicopters. 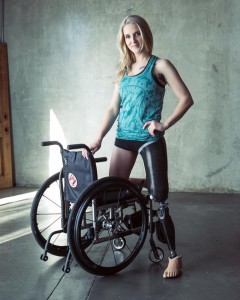 Six years later, in June 2012, during her second tour of duty in Afghanistan, she was in a helicopter with her fellow soldiers, going to resupply ammunition, transport soldiers and help those near the mosque overthrown in Musa Qala, Afghanistan.  Suddenly they realized something was wrong – a crash was imminent.

The helicopter hit the ground, shattering to pieces.  Ennis’ body was shattered too – she tried to stand but her leg couldn’t support her, her mouth was full of blood, the teeth on the right side of her face and her jaw were gone.  Because of damage to her brain, she couldn’t be given any pain medication.  She was transported by helicopter to a British hospital where a plastic surgeon worked on her.  With the objective of getting her strong enough to go back to the US, she underwent almost 40 surgeries in various countries outside of Afghanistan.  Her first return to the US was to Washington DC and finally she was transported to a medical center in San Diego.
For the first few months in the hospitals, she couldn’t eat, drink or do anything by herself. Because her brain shook so much when the helicopter went down, Kirstie’s injuries were mental as well as physical – her memory and comprehension abilities were affected. .  (source: http://www.people.com/article/kirstie-ennis-marine-veteran-recovery-story)

Being born and raised in Florida, Kirstie had rarely seen snow. But Disabled Sports USA – an organization that provides adaptive sports opportunities for people with disabilities to develop independence, confidence and fitness through sports.-  asked her if she wanted to try adaptive snowboarding and she saw it as an opportunity to get out of the hospital and challenge herself to get back on her feet. Not only was she challenged, but she met that challenge head on and aimed toward competing in the 2018 Paralympics.

Since I can no longer be a Marine, I need something to challenge me. When I meet a challenge, I just take it full on with a smile—because it reminds me I’m still alive.”

Kirstie found that running and even walking for long distances was difficult. Through The Bob Woodruff Foundation, whose mission it is to find, fund, and shape innovative programs that help impacted veterans, service members and their families thrive,  she got an IDEO brace, which helps people with leg injuries get back on their feet.  On behalf of the Bob Woodruff Foundation, she joined Walking with the Wounded’s Walk of Britain, a 1,000-mile trek  from Scotland to London to raise money for Harry’s charity Walking With The Wounded.

Her endeavor was against medical advice, even with the support of the brace and Kirstie was in constant pain. She had put off surgery to make the Walk.  When she reached the finish line at Buckingham Palace she was pictured in a tender embrace with Prince Harry, who walked the last part of the trek, and it was then, she says, she finally felt ready for the operation to amputate her left leg below the knee. (source: dailymail.co.uk/news article 3337818

Click on the photo to watch her interview after the Walk: 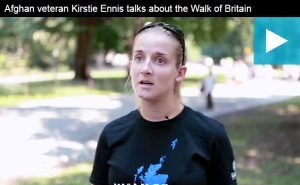 ‘I am doing extremely well and am quite optimistic that this recovery process will be a breeze. I plan to compete in a snowboard competition towards the end of the snow season, and am looking forward to seeing Harry when I compete in the Invictus Games.’ 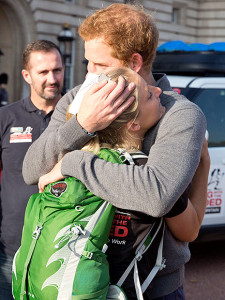 What pushes her forward is her desire to honor her military brothers and sisters who did not make it home.  At the end of the walk on Nov. 1st, she gave Prince Harry the dog tag of a friend and fellow serviceman, T.J. Baune, a Minnesotan Marine Corporal who died in 2012 after his unit was hit by the blast of an IED while on patrol in Helmand Province. The wounded Marine told reporters, that Baune “passed away just 10 days before my helicopter went down and I was injured and the two guys who got blown up with him, Brad and Chris, and are missing their legs now have been part of my own support network in dealing with my own injuries …They were my rocks for a long time, we grew together in hospital. His wife, Colleen, is absolutely amazing. He was just 21.” (source: royal-fans.com )

“I’ve been a firm believer that some of the reason that I’m still continuing the way that I am is because of my buddies looking down on me and giving me strength,” she says. “They never made it home, so I’m living, grieving, walking in their honor and in their memory.” (source: http://www.people.com/article/kirstie-ennis-marine-veteran-recovery-story)

Several weeks after the amputation, her leg began to swell from sepsis and, to further intensify the condition, she had picked up the MRSA bug.  She underwent 3 blood transfusions and on December 21st, a month before she turned 24, she underwent emergency surgery to further amputate her left leg, this time above the knee.

“I went into the first surgery knowing what was going to happen and understanding,” she says. “But when I went in for the above-the-knee amputation, I almost felt robbed. It was one of the most bitter things. There have been days when I have woken up crying. I felt I had lost something, something I wasn’t prepared for.

Kirstie had hopes of competing in the swimming completion of the Invictus Games in Orlando this past May.  However, in April she posted this message on Facebook:

Being the bearer of bad news has never been easy on me. As the majority of you know, I am having more problems with my residual limb, nothing life threatening, but extremely painful, pending another revision/surgery, and makes it nearly impossible to walk or train. I regret to have to inform everyone that I have stepped down from competing in Invictus this year as I know I will not perform my best. You know how competitive I am, and if I don’t feel I’m prepared to win, then I don’t feel like I should be competing. Deep down, I know there is someone out there who has been able to prepare for the Games better than I have been able to, and that person deserves to be able to compete. The decision was very hard for me to make, but it’s due time it be done. In this case, the health of my leg comes first. When I am over this bump in the road, I will be back in the water and training. This is all apart of the recovery process, and being able to make these decisions is key to my success later.

Thanks to everyone understanding and supporting me. I will still be cheering on my team mates and you’ll still see me around and involved in the Games this year, just not competing at this time. Looking forward to being inspired and motivated by the way these men and women face down adversity and chase their dreams of a gold medal. ‪#‎Invictus 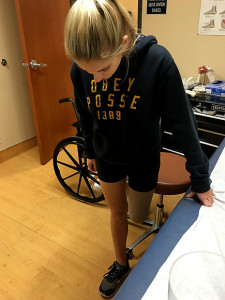 For her Invictus Games profile, Kirstie was asked how adaptive sports helped her recover from her physical and/or emotional injuries:

Sports have made me realize my new sense of normalcy and given me the drive to continue pushing the limits. When I think I can’t, I absolutely can. Sport relieves stress all in its own way, but healthy competition is definitely the biggest motivator.

Kirstie’s determination and spirit make her our inspiration.

To join her on