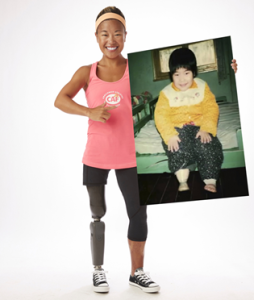 At the age of 1, Scout was abandoned at an government orphanage in Nanjing China.  She had been badly burned in a chemical fire and as a result, had to have her right leg amputated up to mid thigh.  The prosthetic she was given was a rudimentary one, made from wood, masking tape and leather straps.  She spent seven years mopping floors, tending children and washing dishes.  “There was illegal child labor, physical abuse and starvation.  It was really brutal. Then a miracle happened,” remembers Scout. In retrospect, she now believes the dark conditions were not the result of maliciousness but rather the Chinese culture of the time and lack of resources.

Then one day Joe and Susi Bassett came to the orphanage from Michigan to adopt a baby they had already been approved for.  But they also saw a young boy and Scout and decided they wanted all three.  Scouts first reaction to the news was fear.  “I didn’t know what parents or family meant.  I’d never even seen a picture of a non-Asian person.  I’d never been outside.  No one at the orphanage explained what was happening, or that we were leaving for good.  I was terrified.”

Life for the little girl changed radically.  She soon realized she would neve have to go back to that orphanage.  She got the medical treatment she needed and soon was fitted for a proper prosthesis.  “It just felt weird.  I had to use so many new muscles.”

When she was 14, Scout met some people from the Challenged Athlete Foundation.  They gave her a grant which allowed her to train in track and field and Scout found power in running.  Her prosthetist fitted an Ossur running leg specifically for her and taught her the right movements.  And that single piece of adaptive sports equipment changed her life.  “Running became a healing power…and transformed me from a painfully shy recluse to a young woman with confidence, passion and drive.”  Today Scout is a CAF spokesperson and one of their strong advocates of their grant program.  She mentors athletes and addresses students and executives.

“No matter what your obstacle is, you can overcome it.  Take small steps.  As time goes by, the steps will get bigger and you will reach your dream.”

In 2006, Scout enrolled at UCLA on a full academic scholarship, majoring in Communications.  She soon found possibilities in sports that were not available to her in her high school.  She added biking and swimming to her running schedule.  Her prosthetist fitted her with 2 new legs. One was for biking and the other was a replacement for her heavy running prosthesis – a leg specifically for long distance running.  Scout was set for a triathlon.  She started slow, at first couldn’t go more than 100 yards, but with perseverance, within months she finished her first triathlon.  “I didn’t feel disabled.  I felt strong and alive.  It was empowering.” 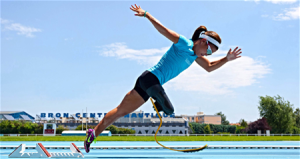 By 2011, Scout was a member of the Paratriathlon Nation Team, winning bronze for her 4th world championship medal at the ITU Paratriathlon World Championships in — CHINA!  She won a bronze medal in the event which was 750m swim, 20k bike, 5k run.

As a competitive Paralympic track sprinter Scout Bassett finished second at the 2012 U.S. Paralympic Track and Field Trials in the 200m and third in the 100m. She is a 2-time silver medalist at the ITU Paratriathlon World Championships.  She  hopes to compete at the 2016 Paralympic Games in Rio in the 100m and 200m events.

But being competitive means something special to Scout.  It’s not about beating other people, it’s about overcoming her own fears.

“Failure isn’t fatal.  You may go through setbacks and disappointments, but you’re not done.  The biggest battle is in your mind.  Get past the doubts and fears and get to where you want to be.”

Learn more about this self-empowering young woman, in her TED talk –

Scout Bassett is a 4’8” powerhouse of empowerment and motivation and our Sunshine Inspiration.

Learn more about the Challenged Athlete Foundation and their services and programs: