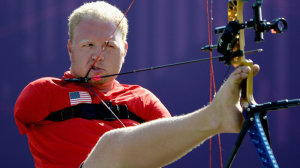 Matt Stutzman was born without arms and given up for adoption by his overwhelmed birth parents when he was 4 months old. Less than a year later, he was adopted by Leon and Jean Stutzman. And his life of “try anything as long as you can do it under your own steam” began.

Jean Stutzman took him to the Shriner’s hospital in St. Louis for his first prosthetic arms and his can-do spirit rose up to the occasion. He was using them in two days, much earlier than the 7 days which the doctors predicted. And the precocious toddler was scooting around the wooden floors of the farmhouse in no time. By 18 months, he was walking and feeding himself.

“My parents taught me that impossible is a state of mind…and not one that I should embrace. It’s a lesson that has served me well, and one that my wife and I are trying to pass on to our three young boys on a daily basis.”

Jean Stutzman paints a telling portrait of Matt’s life: “Our family strategy was to allow Matt the freedom to try almost anything if he could accomplish it under his own steam. The natural tendency would have been to rush in and help him. He liked to climb up in a tree or up in the haymow and even up into the tractor. I remember the landlord would set this five year old boy on his lap and let him drive his John Deer tractor around the fields. Matt liked to help on the farm as much as he could, he would carry five gallon buckets of feed to the calves, went fishing with his father and brother’s. Matt enjoyed playing soccer, basketball, football, and volley ball; in short, Matt’s life was full of action and people. Matt learned to handle life without special accommodations. This would enable him later in life to go and do anything he put his mind to.”

And what he put his mind to was archery. Not an easy sport for a man without arms but Matt figured it out. He joined the US Paralympic team and competed at the 2012 London Paralympic Games where he won a Silver Medal. He now competes, and wins, in state and national championships. He was the only archer to score a perfect 300 at the 2014 North Dakota Bow Hunters Association Indoor 3-D/300 State Archery Championships. He is also the Guinness World Record-holder for the longest accurate shot, a mark of 230 yards that he set in 2011.

“If I can inspire just one person then my job’s done. Really, watching me people can only say, ‘I haven’t got an excuse. I can’t say my back’s hurting or I got a sore finger, this guy’s shooting arrows with no arms.”  Stutzman interview for The Telegraph in the UK.

When he is not competing, Stutzman gives motivational speeches to school and companies around the world. 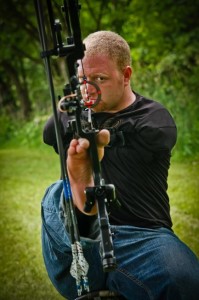 “ I make everyone realize you can do whatever you want in this life if you just try.”