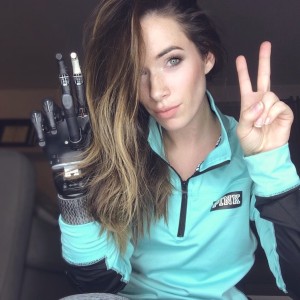 Born without a right forearm, Rebekah Marine was an active child but when she entered high school, she found herself targeted by bullies.  The 14-year-old Rebekah became insecure and withdrew from sports and social activities. She wore baggy sweaters and stood in an awkward way to avoid drawing attention to her missing limb.  Today, 29 year old Rebekah is a model, inspirational speaker and humanitarian.  She has defied all odds in the fashion industry and is one of the most recognizable models in the disabled community.

“I lived most of my life without a prosthetic hand,” Marine told SELF Magazine. “I used one in grade school for a short period of time, but gave up on it when it became too difficult to use. I didn’t use one again until my early 20’s when I started feeling pain in my left hand, most likely due to the overuse of it. I realized I needed to look into an alternative to help me as I grow older.”

In 2011, she decided to explore her options for a myoelectric prosthesis. When she was being fit for her new prosthesis, a friend suggested she model her new “accessory.” It was at that moment Rebekah realized she could turn her “disability” into something extraordinary.

“She decided that missing an arm wasn’t a crutch, but a beautiful way to help other people with disabilities embrace their beauty and embrace their aspirations.” —TIME

It wasn’t long before thousands of people all over the world began recognizing her face on TV, internet, newspapers and magazines. Rebekah has appeared in publications such as TIME, People Magazine, US Weekly, Cosmopolitan, Teen Vogue, Daily News and many more. In 2015 Rebekah appeared in Nordstrom’s 2015 Anniversary catalog and has walked at New York Fashion Week multiple times. (http://www.rebekahmarine.com) 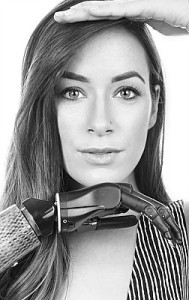 Rebekah, who lives in West Deptford, NJ,  is now an ambassador for Touch Bionics who recently fit her with the i-limb quantum, one of the most advanced prosthetic hands in the world.

In addition to her active modeling career, Rebekkah is also an ambassador for the Lucky Fin Project, a nonprofit organization that supports those with upper limb differences. As an ambassador, she travels around the country mentoring and giving motivational speeches to children with limb differences. Through Lucky Fin, Rebekah met 6 year old Gianna Schiavone, the girl she refers to as “mini-me”.  Together they walked the runway in New York Fashion Week. 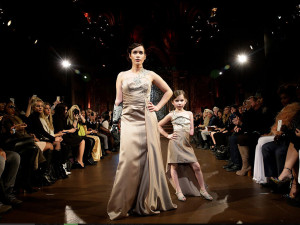 “Gianna’s my mini-me. She looks like me and she was also born the same way I was,” Marine told PEOPLE. “Walking with her meant the world to me. It’s almost symbolic of passing the torch to future generations.”

“I hope that what I’m doing is inspiring people to embrace their uniqueness,” Marine says. “We should be celebrating diversity!”

When she first started modeling, Rebekah posed exclusively with her fake limb, but a photographer taking some shots without it. Soon she was regularly photographed without her prosthetic.

“To be honest, the main thing which counts against me isn’t so much my arm — it’s my height, because I’m only 5 foot 2,”

The Lucky Fin Project is a nonprofit organization that exists to raise awareness and celebrate children and individuals born with symbrachydactyly or other limb differences.  They creates a support network for parents across the U.S. and around the world, linking them to medical information and resources.  They also provide education on limb differences and help  financially supporting efforts for the children to attend specialized camps, obtain prosthetics.

A child being born with a limb difference is not tragic. It’s extremely important to show our children how capable & wonderfully made they are. If we treat them as flawed or limited that is who they will believe themselves to be- and that would be the tragedy.

For information on fitting the i-limb, contact Sunshine Prosthetics & Orthotics.

To learn more about the Lucky Fin Project, visit http://luckyfinproject.org or on Facebook: https://www.facebook.com/LuckyFinProject