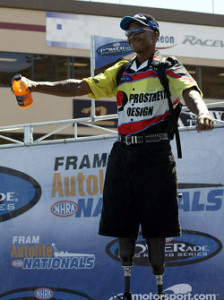 As a youngster, Reggie Showers was always challenging himself – he loved climbing on the boxcars at a rail yard near his home in Philadelphia. At the age of 14, however, the power lines hanging above the box cars surged 13,000 volts of electricity through his young body. To save his life, the doctors had to graft skin onto his third degree burned arms and cut off both his legs below the knee. To Reggie, this was just another challenge.

“You would think a kid would just want to give up but … I never once shed a tear about it…There’s a reason why I’m here,” Showers said. “For all intents and purposes, I should be dead.” (espncdn.com)

After high school, Reggie was dared into a street motorcycle race. He had never raced a street bike, but he loved dirt bikes so he took up the dare and became an instant fan of the sport. Eleven years after losing his legs, Reggie decided to go pro on the IDBA circuit, the minor league of motorcycle racing and was an instant success, earning Pro Champion and Rookie of the Year awards. Over his IDBA career, he had 25 victories and 32 final-round appearances. At first, he disguised his legs, never telling anyone he was an amputee.

“I didn’t want anybody telling me this was too dangerous of a sport for an amputee, so I was very cautious about revealing myself,” Showers said. “I never wanted any special attention.” (cycledrag.com)

In 1995 he joined the NHRA’s elite motorcycle series and eventually hooked up with Prosthetic Design Inc, from Ohio, and they became his sponsor. The president of the company was a race fan and had watched Reggie race but never realized he was an amputee. Reggie balances the motorcycle by using his prostheses and otherwise doesn’t need legs as he races down the track. The prosthetic design company crafted a special pair of prosthetic legs specifically for racing, they were light, with little support below the knees so he could get his feet back on the pegs easier. They were also shorter than his walking legs by about 5” so he could get lower on the bike. His bike has no special devices to accommodate his disability, it’s virtually the same as his competitors’ bikes. 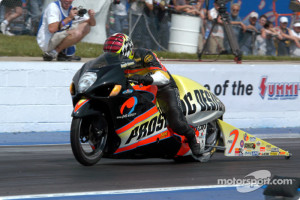 Nearly 20 years after his motorcycle career began, Showers’ fulfilled his dream on September 7th, 2003 by capturing his first national event victory at NHRA’s most illustrious and prestigious race; the Indianapolis U.S. Nationals.

Out of all of the races I could have won, this was the one I wanted most. I think this goes to show just how strong the human spirit is. If you believe in yourself you can do anything you want. We are capable of incredible things.” (cycledrag.com) 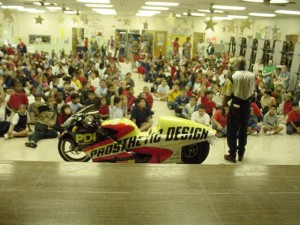 “I’m really lucky to be alive. God spared me for a reason. Now I feel it’s my responsibility to give back to the children.”

His success on the track gave him a sense of responsibility to become a motivator and educator. He often speaks at schools and doesn’t tell the kids that he is an amputee until he’s finished with his racing stories. Then he takes off his legs and lets the children see and hold them – a powerful educational experience.  He also is a welcome visitor at hospitals, speaking with children who have undergone amputations and giving them encouragement. Reggie believes this is his life’s purpose. His message: no limits. Reggie dedicates himself to help and motivate others. He speaks at conferences and other gatherings on the importance of keeping moving. Recently he spoke at the Amputee Coalition meeting on the value of their programs for amputees.

“I cannot succumb to my disability. I cannot let my disability run my life. I am only disabled if I think I am.” 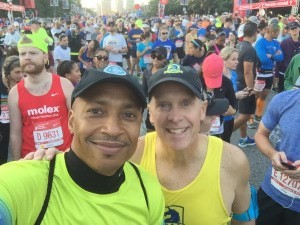 This year a friend invited Reggie to run the 2016 Chicago Marathon as part of a fund raiser for the Muscular Dystrophy Association. He immediately began researching what it would take to prepare. You can read about his prep on his blog at https://lifewithreggie.com/.
He had to find the right combination of prosthetic socks because there is a residual limb volume loss during the run. He had to avoid the skin breakdown and pain from pressure. He finished the race in 9 hours, slowed by a knee injury and a few maintenance stops but it was a victory for him.

“What an amazing experience. One that I will never forget. It was another opportunity for me to show the incredible resolve of the human spirit. Human beings are capable of some amazing things. When people look at me, they see me as an amputee. Now they can also see me as a marathoner!”

In May of this year, National Geographic series “Mygrations” aired, following a human “herd” of twenty people attempting to walk the migratory path of the African Wildebeests, a 200 mile trek. Reggie Showers became part of this herd. He issued a challenge to his social media followers to walk – “ I’m not asking you to walk 5 miles per day, but to do what you can. If you can’t walk, roll. To all of my friends in wheel chairs I will be supporting you on select days as I use a wheel chair to get my miles in. If I can do this, there’s no reason why you can’t do this.”