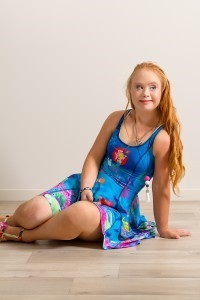 Madeline Stuart, 19, is the only professional adult model with Down Syndrome in the world.

Maddy’s goal is to change the way people discriminate against disability, She thinks of Down Syndrome is a blessing, something to be celebrated. Her joy is very apparent in her modeling photos and her runway walk – she shines!

“anything is possible with love”

She gives people hope that their children living with Down syndrome could achieve anything they set their mind to.

Maddy’s mother, Roseanne said “If you’d asked me four years ago if Madeline was going to have a boyfriend and be a model, I’d say no, because back then I wasn’t prepared to see that part of her life, I hadn’t evolved to have an 18-year-old daughter. When she was 14, I thought she was never going to go to work, and she was never going to leave my side. I was so over-protective. But as she grew up, I evolved, because I could see that she has the same rights as anyone else, and she is capable of anything.” Her boyfriend, who also has an intellectual disability at the same level as Maddy, is a strong supporter of her career and rounds out her teenage life.

A heart condition necessitated open heart surgery when she was 2 months old but today Maddy is a very active teen on a strict fitness regimen she has imposed on herself. Weight gain is common with Down Syndrome and she is determined to stay fit to keep up her modelling career. She loves spending time with her friends, dancing to pop music and hip hop, doing gymnastics, working with a personal trainer and being a cheerleader.

Maddy has walked the catwalk in New York for auto immune awareness, modelled at New York Fashion Week and has become the face of a cosmetic company called Glossigirl, which makes her the first model with a disability to ever do this. She also has a bag named after her called ‘The Madeline” by a handbag company, EverMaya, which donates its sales to National Down Syndrome Society. And her own line of leggings – as bright and cheery as Maddy herself!
This young Australian has traveled around the world pursuing her dream career. She has been nominated for Pride of Australia Award and the young Australian of the Year Award. She received the Model of the Year Award at Melange 2015 in San Francisco. 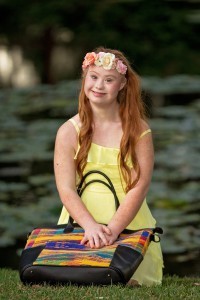 Remembering back to when Maddy was born, her mother Rosanne says “I was told to expect her never to grow past an eight or nine-year-old, and that she would never achieve anything,” she remembers. “As she got older, we’d go to the park and parents would take their children away. Kids would move away. She’d say, ‘Mum, why?’ And I’d say, ‘Darling, they’ve gone to get some afternoon tea’. She never actually understood that it was because of the discrimination, she just thought they were ready to go home and it was just a coincidence.”

“I always just protected her and shielded her from the negativity, because there was a lot of that, and a lot of discrimination. But she’s grown up in a loving environment, so she just loves everyone and thinks everyone’s beautiful.”

Her first modelling gig as seen on the Today Show in Australia.

Roseanne Stuart has become her daughter’s manager and is trying to get a modelling agency, preferably in Australia, to handle her career.  “She has been isolated and alone for most of her life. She has a disability. It’s not something that people just open their arms and say, “Hi, you have a disability, come and join the conversation.” People are scared. They don’t know how to react. I think most discrimination is that people are a bit naïve, and the more they see Madeline, the more they see someone with a disability in the public eye, they will learn.”

“It doesn’t matter who you are. Everyone deserves the same respect, the same love, and the same inclusion.”