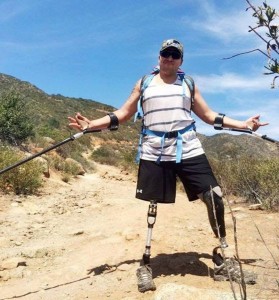 In August 2009, Marine Julian Torres got orders to report to Jacksonville NC to  join the “Never to Quit Battalion” 2nd Battalion 6th Marines. He became a Machine Gun Squad Leader, and in January 2010 was sent to Machine Gun Leaders Course.  Hand-picked by the battalion commander he was meritoriously promoted to the rank of Sergeant.  Torres was sent to Marjah, in the Helmand Providence of Afghanistan to fight the Taliban forces and in less than a month, his life was changed forever when an explosive device blew off both of his legs at the knees.

Encouraged and motivated by his wife, whom he calls his rock and best friend, and two young children, Julian felt he needed a strong achievement in his life as well as a way to honor fallen comrades.

He heard about The Heroes Project from a buddy and fellow double amputee, Mark Zambon, who had made the climb in August 2012 and was now an ambassador for the nonprofit. Julian contacted Tim Medvetz, The Heroes Project’s founder, president and expedition leader and, Medvetz became one of the Heroes Project’s trainers who worked on conditioning Torres.  The nonprofit has taken wounded veterans to the highest peak on every continent, Everest, Denali and Aconcagua (in Argentina) among them.

Every day, Julian climbed another hill with a different purpose, building speed, endurance, steepness, altitude. Each day he achieved more than the day before, determined to tame the 19,341-foot Mt. Kilimanjaro in Tasmania. 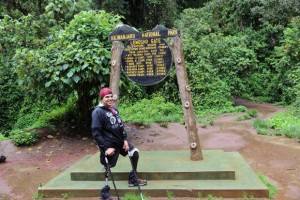 GQ writer Davy Rothbart accompanied the team on the expedition and subsequently wrote a story of the climb entitled Mount Impossible: How a Disabled Veteran Conquered Kilimanjaro.  Ultimate Kilimanjaro® is the official Kilimanjaro operator for The Heroes Project

“The rainy season is in full effect. And here in the rain forest, where the trail isn’t oozing, it’s perilously slick. Again and again, Julian slips and goes crashing hard to the ground. It’s a punishing routine that I’m having trouble growing used to watching. Tim, right at his heels, treats each of his falls matter-of-factly, teasing him, complimenting him on his landings, or sometimes saying nothing at all as Julian gathers his side sticks and rises to his artificial feet.”
Julian began his ascent on Nov. 3, 2015 and reached the summit, Uhuru Point, the summit of Mount Kilimanjaro. on Nov. 11 which, fittingly, is Veterans Day.

This GQ video takes you on that awe-inspiring climb:

Another excerpt from Davy Rothbart’s story:

“Over the course of hours, we work our way agonizingly up the cliff. The footholds are so precarious, Julian has to reach down, bend his metal legs, and place his feet on a mossy knob or a spit of rock as narrow as a finger. It’s nerve-jangling work…. A guy with no legs should not be able to climb a mountain. It should be impossible. But here before me, the impossible is happening, one painful step at a time.”

When the team arrived at the summit of Mt. Kilimanjaro, there was a phone interview with CNN reporter Brooke Baldwin, recapping the journey..  Asked why he did it, Torres said it was to honor his fallen brothers and spoke of how important Veteran’s Day is.  Watch this powerful and inspiring video. Source: CNN

Asked for Sidestix blog  what advice he would give to those new to crutches or prosthetics, Torres said:

“Making your body sore. In the moment it’s hard. You question yourself, why am I doing this?

I say, “It’s ok man. You gotta keep doing this. This is good for you.” This is the ticket. You gotta try. Just do it. Cause the feeling of being free is worth the squeeze.”

How did this awesome wounded warrior manage to persist in this daunting climb, in spite of severe open blisters which could have led to additional amputation, plus wet and slippery terrain making foot and handholds treacherous?  In his words:

To learn more about The Heroes Project, a nonprofit organization that works with veterans, soldiers, marines, and military families and communities on all levels, visit Theheroesproject.org. The Heroes Project supports climbing programs for wounded marines, soldiers and veterans, by putting injured war veterans on some of the highest summits of the world.  The Heroes Project  is made possible with help through sponsorships and donations.