Ask someone what they think of when they think of an early prosthetic and they would likely bring up the Captain Hook and Pegleg Pete images from tales of pirates.  Actually, 3,000 year old  prosthetic devices have been uncovered by archeologists on mummified remains. 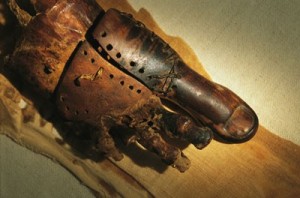 This prosthetic toe dates back to between 950 and 710 B.C. Kenneth Garrett/Getty Images

Jump forward nearly 2,000 years, into the Dark Ages. Knights, in an effort to maintain their image of strength, hid missing limbs with iron prosthetics. They weren’t functional beyond hiding the lost limb.
In the early 1500’s, French military doctor Ambroise Paré invented a hinged mechanical hand and prosthetic legs with locking knees and specialized attachment harnesses. A Dutch surgeon, Pieter Verduyn developed a lower leg prosthesis with specialized hinges around the end of the 17th century.

When gas anesthesia was developed in the 1840’s, along with more sterile operating environments, doctors were able to perform more successful amputations, allowing them to prepare the limb to interface with a prosthesis. With the advent of gaseous anesthesia in the 1840s, doctors could perform longer, more meticulous amputation surgeries, allowing them to operate on the limb stump in such a way as to prepare it for interfacing with a prosthesis. Advances in sterile, germ free surgeries also improved the success rate of amputation procedures, increasing the need for prosthetic limbs.

Modern times, along with continuing improvements in surgical techniques, brought newer materials for prosthetics.  The old wood and metal are replaced with advanced plastics and carbon fiber composites, making the prosthetics lighter, stronger and more realistic.  Add electronic technology advances and today’s prosthetics are capable of automatically adapting their function during actions like gripping or walking or running.

Huge steps forward in the field of biomechanics has led to the use of computers to analyze gaits and motions .  Used to help train athletes, “motion capture technology” was also later applied to computer animation in films and video games, making them more fluid and realistic.   In the not too distant future, these computers will allow amputee patients can have clinical physiotherapy assessments in their own homes, according to Dr Darren Cosker, Royal Society Industry Fellow from the University of Bath Department of Computer Science. The University of Bath, England has a research team led by Dr. Cosker, in collaboration with the University’s Department for Health.  ( http://www.healthcanal.com/surgery-rehabilitation/65313-gaming-technology-could-help-amputees-learn-to-walk-again.html ) They are working with members of the armed forces who have undergone amputations and/or are suffering osteoarthritis, analyzing their movement with prosthetic limbs and using the information to design better prosthetics and correct adverse movement patterns. Dr James Bilzon, Senior Lecturer in Exercise Physiology and Head of the University of Bath (England) Department for Heath, said: “This is a very exciting opportunity to build on our existing research strengths in human biomechanics and exercise-based rehabilitation.”

Today’s prosthetics are designed with the individual needs of the amputee.  There are cosmetic limbs which are designed with realistic appearance as the goal.  There are “skins” or “fairings” which can cover the prosthesis and make them look totally realistic, down to freckles and hairs and advanced pigments matching skin tones. Companies such as UNYQ and Alleles offer these covers 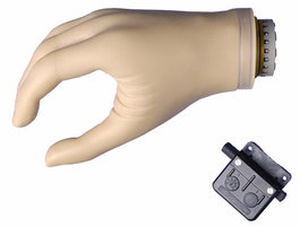 Other prosthetic limbs are designed with function as the main purpose. For example, a controllable prosthetic hand can consist of a split hook that can be opened or closed to grip objects or perform other types of tasks. A runner’s prosthetic foot can be designed strictly for running and interchanged with the walking foot. 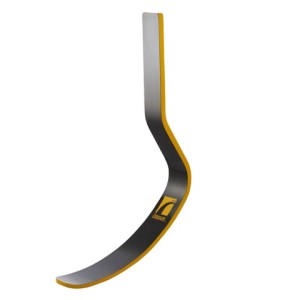 Moving forward in technological capabilities, prosthetics today can be body powered through cables, motors or electric impulses. The i-Limb by Touch Bionics is powered by unique biosim software the ability to customize the hand for daily needs. Each finger bends at the natural joints so that it can accurately adapt to fit around the shape of the object you want to grasp. 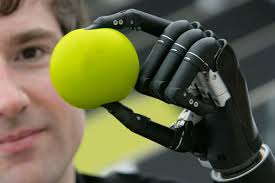 The new Ottobock C-Leg4 uses sophisticated sensors to determine where it is in space at all times and to make precise adjustments at every moment of every step. As a result, C-Leg 4 lets you easily navigate ramps, stairs, and nearly every type of challenging surface – even when walking backwards. 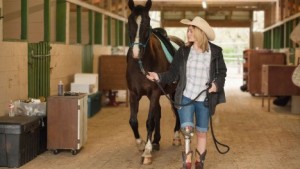 The development of 3D printers has inspired many youngsters to work in school projects and “print” prosthetic hands. Three sixth grade girls from Irmo, South Carolina, used their school’s 3D printer to build hands for kids in need. They teamed with Enabling the Future, an organization that pairs people who need prosthetics with people who have 3D printers and printed and assembled a custom hand that would allow a young girl born without a left hand to do simple tasks that eluded her for years.  They even made it in purple – the girl’s favorite color!

E-nable, an online volunteer organization, founded in 2013 by Jon Schull, the group matches children in need of prosthetic hands and fingers with volunteers able to make them on 3-D printers. Designs may be downloaded into the machines at no charge, and members who create new models share their software plans freely with others 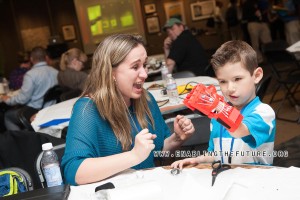 A mother reacts to seeing her child make a fist with his new 3D printed fingers for the first time at the first e-NABLE “Prosthetists Meets Printers” conference at Johns Hopkins – Sept. 2014.

From a wood and metal toe to a microprocessor movement in a limb – prosthetics technologies have advanced and will continue to advance. Research in neural interfacing will allow artificial devices to more effectively stimulate the nerves or brain in order to restore a sense of touch and allow patients to feel their artificial limb.

Brooke Artesi, CPO, LPO, founder of Sunshine Prosthetics & Orthotics, keeps current, continually undergoing training to learn the operation and customization of the new prosthetics. She is the only Northern New Jersey certified Prosthetist for the ILimb Ultra byTouchBionics.

“It’s so vital to keep up with the rapidly growing field of prosthetics and it’s exciting to see how the new devices are getting closer to natural movements and feel and how our patients are becoming more active, which is our goal.”