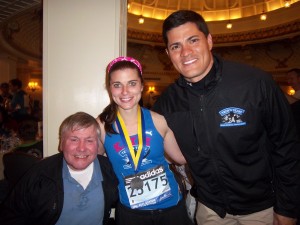 As a 20 year old college sophomore in 2006, Katie Jerdee was running with soccer teammates at Northeastern University when she suddenly lost control of her right arm and leg.  She began to veer uncontrollably into oncoming traffic. She grabbed a street sign post to stop. “It felt like a giant magnet was pulling my right arm,” she said, adding she got a severe headache like never before. She slurred her speech when she talked. Jerdee agreed to go to the emergency roon,thinking she was probably just dehydrated.
“I had no idea what was happening,” she recalled. “I waited on a bench while the other girls ran to the field to get my coach.”  Transported to Brigham and Women’s Hospital, Katie heard the diagnosis of stroke.

“When I heard “stroke,” I thought that’s what grandparents have,” she said “I asked my doctor if I’d be able to walk and play soccer again. He said he didn’t know, but younger people do recover better. He didn’t guarantee anything except that it would be a lot of hard work going forward.”

Physicians told her she suffered an ischemic stroke in her cerebellum, linked to an hereditary clotting disorder. She remained in intensive care for a week. She couldn’t walk or run when she left the hospital and her right side was slightly paralyzed.

Fatigue,  a weakened immune system and slurred speech didn’t stop Jerdee from reaching a compromise with her doctor to continue two of her four classes at the university. She began outpatient rehabilitation with physical therapy, occupational therapy and speech therapy. 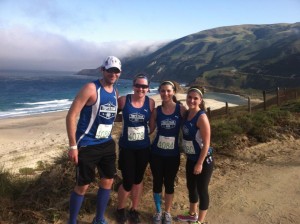 At the Big Sur Marathon in California

With the help of her therapies, she was able to walk and run again and her speech cleared.  She wasn’t able to play soccer at first, but decided she wouldn’t settle.  Against her parents’ wishes, she returned to soccer in 2007.  She remembers her first scrimmage –  “I could do everything in my brain,” but not on the field, she said.  But her frustration became her motivation.

It was during her time in rehab that she became met Tedy Bruschi, a linebacker for the New England Patriots, who had a stroke in 2005 and who returned to the gridiron. He had been treated at the same rehabilitation center as Jerdee.

“I was able to cross the finish line with my soccer coach from Northeastern, who was there when I had my stroke,” she said. “We both held hands and crossed the finish line together.”

Since 2010, she has run 8 marathons with Tedy’s Team.  Graduating from Northeastern in 2010, Jerdee works in Boston at a Venture Capital firm focusing on investments in start-up life science companies.  Keeping up her love for soccer, she coaches a girls soccer team in Boston.

In 2011,  her sister Hannah became her marathon running mate.  “The role of family members of stroke victims is often left unnoticed. From the first person in the emergency room and supporting me through my months of rehab to running next to me in road races, Hannah has stuck through every step of the way.”

Jerdee and Bruschi work with the American Heart Association to raise awareness among young people about stroke. Nearly 1/4 of strokes occur in people under the age of 65. (http://www.strokecenter.org/)

Jerdee shares a quote that has helped her:

“Life is 10 percent what happens to you and 90 percent how you react to it.”