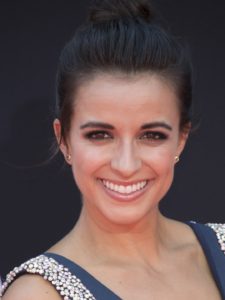 In 2006, at the age of 11, Victoria Arlen developed a strong pain in her side.  It turned into a fight for survival – she was diagnosed with 2 extremely rare neurological conditions which attacked her spine and brain, leaving her in a vegetative state.  Doctors said it was a hopeless situation and told her parents if she survived (and it was likely she wouldn’t), she would never walk or talk or function normally.  The diseases would leave her with severe neurological deficits.  In Victoria’s own words: “In the experts’ eyes there was nothing that could be done. Except they failed to realize one thing….

She was locked inside a body that was unable to speak or move, unable to tell the doctors or her family that she could still think and hear.

Victoria had been an athlete all her life, the sister of 3 brothers and parents who were all athletes, some professional.  Her determination to survive was powerfully strong.  After 4 years of trying to communicate, she was able to blink.  She calls it the “blink of hope”.  Her progress slowly continued to speaking, moving fingers, sitting up and then eventually how to navigate in a wheelchair.  Her leg movement did not return.  Again the doctors said she’d never walk.

Still a determine athlete, especially swimming, she fought every day to get stronger and better.  The wheelchair made life complicated but she didn’t let it get in the way of the sports she loved and she made the 2012 Paralympics – 2 years after that first blink.  Victoria, at the age of 17, she won a gold medal in swimming at the London 2012 games. 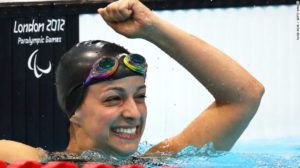 In 2015 at the age of twenty she was hired as a reporter/host for ESPN, becoming one of the youngest on air personalities ever hired.

But she still felt she wasn’t complete, she wouldn’t accept the prognosis of never walking again.

“  You can never just settle where you are, ever. By settling you stop living.
Never stop living. “

In 2013, when she discovered a paralysis recovery center called Project Walk.

“It was the first place that people were like, ‘We don’t know what you’re capable of. But we’re going to try.’ … I just went at it four to five hours a day with a trainer and just kept pushing,” she said.  But Project Walk was over on the West Coast in California and Victoria and her family lived in Massachusetts. 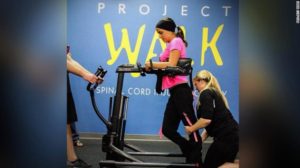 In November, 2015 they brought Project Walk to the east coast – Boston.  She trained 6 days a week, 5-6 hours a day.  She push herself beyond limits.

“Challenges occur and sometimes you fall to depths that you never even knew were possible. But then with every fall you have the chance to rise higher than ever and be better than you were before. “

After 3 years and thousands of hours of intense therapy, she felt a small movement in her right leg, and took her first step.  Although she had no feeling in her legs, she began to walk.

“I had spent almost a decade in a wheelchair, and now I was on my feet.”

Last fall Victoria achieved another dream – to dance on “Dancing with the Stars”.  She made it all the way to the semifinals – learning not only to dance, but to dance on unfeeling legs.  She and her pro dance partner Val Chmerkovskiy, created a system of cues and hours and hours of repetition.

Victoria now works as a host and a reporter for programs and events like SportsCenter and the X Games.  Sharing her life’s motto: “FACE IT, EMBRACE IT, DEFY IT, CONQUER IT”, Victoria founded the Victoria’s Victory Foundation. The Foundation provides support to those all over the world looking to lead a victorious lifestyle to overcome their obstacles and achieve their own victory.  The VVF will provide scholarships to individuals and organizations that provide support and training for overcoming obstacles and making lifestyle changes that will have a positive impact.