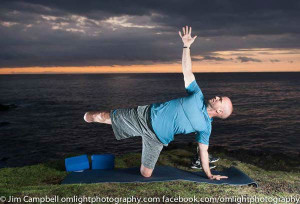 In 2004, during combat in Iraq, an improvised explosive device (IED) detonated beneath Dan Nevins’ vehicle. He lost both legs below the knee, and lives with a traumatic brain injury (TBI) and the emotional wounds of war.  He also lives with determination, resiliency, a positive attitude and a passion for helping other wounded vets do the same through yoga.

“I just remember having this revelation that I’m alive, I’m alive! That I better do something to keep it that way.”

Dan spent 18 months at Walter Reed Medical Center, but not wanting to use drugs or alcohol to alleviate post-combat stress, he resorted to physical achievements instead.  He joined the Wounded Warrior Project and learned to become active once again – climbing mountains and playing golf.  He climbed Mr. Kilimanjaro in 2010.

Dan credits WWP with helping him through his rehabilitation and nurturing his can-do spirit.   In 2008, Dan received WWP’s highest honor, the George C. Lang Award for Courage, for his efforts on behalf of the organization. He went on to become the director of WWP’s Warriors Speak program, where he taught other wounded warriors and their caregivers how to share their stories with the public and serve as spokespeople for the organization, much like he had. (http://dannevins.com/)

.In 2013, after a surgery on his right residual limb,  Dan started having flashbacks.

“And those thoughts of the not-so-great experiences from combat just kept coming back. I didn’t get to the point of suicide, but I finally understood in those 8 weeks at home and I knew that I needed help.”

A friend suggested he try yoga.

But Dan relented and joined a yoga class. 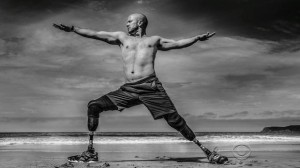 “I got into this Warrior One pose. I rooted down and I felt this real surge of energy from the earth up into my body like into my soul and I shot up like ‘Oh my God, I get it’ like the earth was saying ‘where have you been the last ten years.”

Dan went on to become a certified Baptiste yoga instructor, holding classes of his own for veterans and non-veterans, sharing the inspiration which drives him.  He has also become a motivational speaker, travelling the world to deliver an inspirational message of leadership, perseverance, resilience and overcoming adversity.

Dan leads yoga retreats throughout the world, giving instruction in meditation as well as yoga – motivating attendees to discover what is truly important. In June 2016, he led a yoga class in Bryant Park, NY, sharing his story and his training. 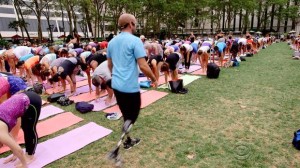 In late 2015,  Dan established the Yodha Foundation. Through the foundation, he is developing the Warrior Spirit Retreat, a non-profit that will empower warriors and their families to greater possibilities by providing them with new tools for healing from the invisible wounds of war. Set on a serene organic family farm in St. Augustine, Florida, the holistic retreat will offer a curriculum centered on yoga, mindfulness and meditation, and will be free of charge to veterans and their families. (http://dannevins.com/)

Dan believes that while many organizations are doing a good job of encouraging veterans to do yoga, there is a potential for alienating veterans to the practice by labeling them as such.  For him, the power of yoga was making him realize that his emotional scars and trauma were no different than anyone else’s; he wasn’t damaged or different from anyone else.

“Veterans are just human beings; human beings who wear a label that insinuates suffering because we’ve been at war for 15 years. And if we all had to wear labels or signs that identified us as someone living with traumatic experiences, I feel we would be hard pressed to find and adult who didn’t wear a sign.” (yoganonymous.com)

In an interview with Yoganonymous.com, Dan was asked about veterans who have benefited from yoga:

“I’ve heard so many stories about veterans healing through yoga than I can even count. It fills me up to hear all the stories and keeps me grounded in the notion that I’m doing exactly what I’m supposed to be doing. Everything from recovering after attempted suicide, to coming off of drugs, alcohol, and prescription medication. I know personally how powerful that is. Yoga is changing lives, and I feel lucky that I was hurt so severely (physically). Because I don’t have legs, people listen a little harder and they try a little harder. They give it another chance, another day, and with that grace will inevitably come transformation—from broken to whole; from resigned to lit up with possibility. There is no way that I can NOT teach yoga—it’s in me forever.

“When I went to my Baptiste Level 1 teacher training, I did so with a chip on my shoulder… it got clear to me that we ALL deal with our own stories… our own baggage.  There is always going to be someone who has it worse than me. In those moments, I realized that the chip on my shoulder was bullshit; that my trauma was mine, and others had theirs, and that we were all there to learn and grow and heal together. I no longer felt like the broken, wounded veteran in the room with a blinking neon sign. I was just another human being trying to heal and grow. That moment changed everything for me—how I see myself and how I see others. I’m eternally grateful for that lesson.” (yoganonymous.com)

“My greatest hope as a teacher is to share with the world, the concrete tools through the practice—to heal the invisible wounds we all carry from the personal wars we’re all engaged in,” he said. “I hope that my story, and the healing I’ve found inspires others to do the work in healing themselves and others.”  (yoganonymous.com)