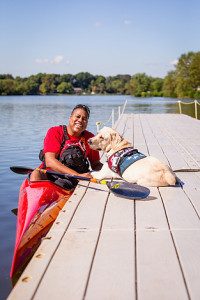 Brandon Holiday grew up athletic –  playing various sports, tennis, baseball and training in martial arts.   He also grew up with Systemic Lupus, Primary Addison’s and a blood clotting condition (Antiphosolipid Syndrome).  After college, he became a police officer but an injury in the line of duty and medical complications from Systemic Lupus forced him to leave the police force.  The changing symptoms of his disease made it necessary for him to adjust his life. Lupus is an autoimmune disease where the body attacks itself and causes symptoms like chronic fatigue, pleurisy, high fevers, restlessness, and loss of kidney function.

In 2006, after four months in the hospital battling with blood clots, wound care and hyperbaric chamber treatments, doctors had to amputate his left leg below the knee. Reaching out for help facing his challenges dealing with his injuries and disease led him Challenged Athletes Foundation who awarded him a grant to travel and attend the Extremity Games. It was life-changing for him.

“I realized that there had to be more than just accepting you’re depressed and here is some medicine to help.”

He began physical therapy and rebuilding his life, and 10 months later  attended the Extremity Games. Extremity Games is an extreme sports event for people with amputations and/or spinal cord injuries, hosted by Athletes with Disabilities Network. It was there that Brandon met other challenged athletes and was able see people with disabilities surf, rock climb, wakeboard and ride motocross.  He realized then that he can do anything, do what these other athletes were doing.  “I was empowered by these athletes and felt like I was regaining that competitive nature I had before.”

“I will always be in the fight and take what you perceive as a limitation and change it to limitless possibilities by adapting.” 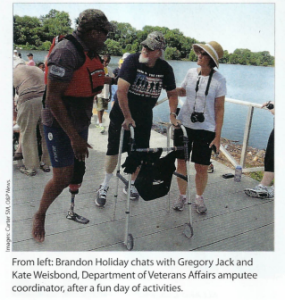 Since 2007, Brandon has won a bronze medal in mix martial arts, silver medal in recreational kayaking and paddled his kayak into five gold medals at the United States Sprint National Championships, becoming the 2014 and 2015 K1, Paracanoe men’s 200m & 500m United States Paracanoe Sprint Kayak Champion and the 2014 Master’s 35+ Able Bodied 500m Champion, beating out able-bodied contenders in his age group.
Over the past 9 years Brandon has been working with other disabled community members, veterans through adaptive sports and mentoring outreach. “ I see the smiles and light in their eyes as they try and succeed at the adaptive clinics. Being able to see the changes in attitude and focus of the people whose lives we impact through sports and outreach helps me heal mentally and physically.  The power of sport has changed my life for the better.”

His dream of making the US National  Paracanoe Team became a reality and he will be on his way to Duisburg, Germany this month to compete in the 2016 ICF Paracanoe World Championships.  He’ll also be competing there to qualify for a spot on the Paralympic team for Sprint Kayaking.

“Finding the ability to compete again and the opportunities, especially to have the possibility to represent your country, I don’t know who wouldn’t want that dream.”

“ In life I figure we can either let our circumstances beat us, or make the best out of the situations life gives us. Always in the fight!”

Working with the Athletes with Disabilities Network, Brandon has started a Chapter for Athletes with Disabilities Network, which is ADN Northeast Chapter, a non-profit US Canoe Kayak Club.   Its mission is: “To promote a better quality of life for people with physical disabilities by creating awareness and offering opportunities to get involved with athletic, recreational and educational activities locally. The innovation that ADN represents is inclusion for people with disabilities to have access to weekly activities. This inclusion can lead to a better quality of life, increased confidence, and self-esteem for people with disabilities, which can then lead to lower depression rates, lower medical costs and improve patient outcomes.”  As Program Director, Brandon has developed 3 programs for this organization –  Mentoring & Outreach, SportsAbility Regional Adaptive Sports Program and Adaptive Sports Coalition.  Using sports as a catalyst for conversation and engagement, ADN reaches out to schools, hospitals, and support groups to teach disability awareness and introduce a variety of adaptive sports.  Through the regional sports programs, ADN/Northeast  provides educational and adaptive sports clinics, kayaking and rowing.

In addition to his work with ADN, Brandon has put formed an Operation Rebound team, via the Challenged Athletes Foundation that encompasses community members in addition to cognitive and physically disabled members.  The purpose is to be active together, whether it be running, cycling, swimming or any other event.  There are currently about 160 members on the team including 15 amputee, spinalcord, CP and other varied disabilities

President Theodore Roosevelt said, “It is not the critic who counts, not the man who points out how the strong man stumbled, or where the doer of deeds could have done better. The credit belongs to the man who is actually in the arena, whose face is marred by dust and sweat and blood, who strives valiantly, who errs and comes short again and again, who knows the great enthusiasms, the great devotions, and spends himself in a worthy cause, who at best knows achievement and who at the worst if he fails at least fails while daring greatly so that his place shall never be with those cold and timid souls who know neither victory nor defeat.”