When Lester Sabolich opened his prosthetic clinic in Oklahoma City in 1947, he just wanted to make a change in lives.  His son, John, grew up watching his father design prostheses and was inspired to join the business. He attended New York University and became a certified prosthetist-orthotist, eventually taking over his father’s business in the 1980’s..

John realized he did not like turning away patients in need of prosthetics that didn’t have health insurance to pay for them.  His son, Scott, grew up seeing these patients sadly leave the clinic.

“When I saw people coming to dad that had no health insurance coverage, I saw the pain in his eyes when he had to turn someone away,” Scott said. “It was a big thing for me to see dad find another way to get someone help when the world is telling you there is no help available.”

In 1995,  John founded Limbs for Life, a non-profit based solely on donations. Scott got his prosthetist-orthotist certification, following in his father’s footsteps. “Everyone has a hero when they grow up,” Scott said. “…I idolize my father for what he did in the field and what he did for people. It was the coolest thing in the world to see him take someone that was disabled and make them enabled.”

Limbs for Life,  worked with local prosthetic clinics to lower the price of prostheses for patients. These prostheses cost upwards of $10,000, and Limbs for Life brought the price down to $2,500 for a below-knee limb and $3,500 for an above-knee limb.

Limbs for Life, has now served patients from 31 different states and six countries.

Video by David and David Productions

The work of Limbs for Life has inspired people to fundraise to help cover the costs of the prosthetics.

Caitlin Adams, a member of Towson, Maryland’s cross country team, ran 305 miles across the state of Maryland to raise money for Limbs for Life.  “

“Through all the tough times, all the stress, all the good and bad, I found there was one thing that always got me through it… running. I believe everyone should have this opportunity. Every $2500-$3000 raised is another limb for someone. Together we can help make someone’s life better!” (http://runacrossmaryland.com)

The run was originally supposed to be 390 miles but Caitlin made some fund-raising detours along the way and ended up running over 400 miles!  You can see her journey on her Instagram account https://www.instagram.com/p/4ebLubtRwM/) 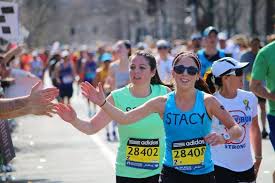 Stacy Friedman running the Boston Marathon, in honor of a Marathon Bombing victim and fund-raising for Limbs for Life

Stacy Friedman ran the Boston Marathon with a number given to Adrienne Haslet-Davis, her friend and a professional dancer who was five feet away from the second Boston Marathon bomb, which tore through her left foot.  She has since been adjusting to her new prosthesis.

Stacy said she is using her friend’s progress as her motivation. “What gets me through it is just thinking about Adrienne and all of the obstacles that she’s overcome in the past year,” Not only is Stacy running for her friend; she is also raising money for Limbs for Life.

“I can never stop thinking about the people who are going through similar, tragic limb loss for any other reason and not having the support that we’ve had,” said Haslet-Davis.

Stacy was introduced to Limbs for Life when her brother’s best friend lost his leg in a tragic accident. Less than a year after the accident, her brother and his friend ran side by side for 26.2 miles and, with each others arms clasped triumphantly toward the sky, they crossed the finish line together having jointly raised $15,000 for Limbs for Life. 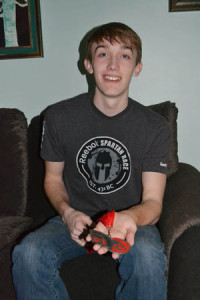 Stone Page participates in Spartan Races, obstacle courses during which competitors of varying ages and physical conditions test their stamina and self-confidence, while confronting some natural fears, such as water, heights and fire. Obstacles can include rope climbing, large tire flipping, spear throwing and sandbag carrying. Competitors never know exactly which obstacles they’ll face until they show up at the event.

In 2014, Stone’s team, which included his mother and his uncle  finished the Sprint, a five-mile course at a Palmerton ski resort in eastern Pennsylvania.

“We were carrying 40-pound bags of sand, and half-way up the hill we encountered a double-amputee who had lost both legs at the knees and was crawling with the sandbag attached to his back with duct tape. No one helped this man along the course, because, in spite of his obvious handicap, he, like many other disabled people, prefer to accomplish their goals on their own. Later, we learned that this man was a veteran and was part of a team of disabled veterans.”

Stone was so impressed with this man’s courage that he began searching for organizations that provide prosthetic care for people who are unable to afford it and, at the same time, promote awareness of the obstacles these people encounter in everyday life.  His research led him to Limbs for Life and he set to work fundraising by selling T-shirts and sending donations to LFL.

More about Limbs for Life

Collaborating clinics in 29 states have agreed to provide prosthetics, fittings and adjustments and additional services for a fixed contract price to clients who have been approved for services from our foundation. Clinics donate their time and talents to help the amputees. Limbs for Life Foundation helps with componentry as it is available and provides a financial bridge between low-income amputees and the quality prosthetic care needed. With appropriate care and assistance, amputees have the opportunity for a productive and independent lifestyle.

Limbs for Life will pay $2,500 for a below-knee prosthetic and $3,500 for an above-knee device. The specific terms and agreement are included in the Client Application. The clinic portion must be completed by the partner clinic and submitted with the client application.

Limbs for Life – Helping amputees in need and inspiring awareness

For FAQS and an application, visit:  http://limbsforlife.org/get-help/

2 comments on “Limbs for Life – an Inspiring Organization”