On October 16, 2010,  on a kickoff to the Army Black Knights, Rutgers defensive tackle Eric LeGrand collided with the ball carrier. He suffered a severe spinal cord injury and lay on the ground unable to move.  As the gurney rolled off the field at MetLife Stadium, LeGrand tried to force a thumbs up to the crowd to tell them that he was alright but unable to perform the gesture, saying “it felt like a thousand pounds”. 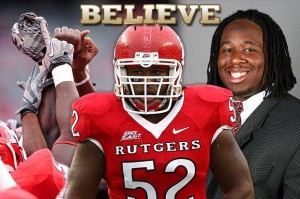 He was taken to the intensive care unit of the Hackensack University Medical Center, in Hackensack, New Jersey, where doctors determined he was paralyzed from the neck down due to fractures of the C3 and C4 cervical vertebrae.  He was put on a respirator to help him breathe and doctors informed his mother, Karen LeGrand, that he would most likely need the machine to continue breathing for the rest of his life.  They also told her that he had a 0-5% chance of walking again.  The next day when LeGrand woke up, he managed to mouth the words; “I’ll be back,” to his mother.   About two weeks later, he was transferred to Kessler Institute for Rehabilitation, known for spinal cord rehabilitation.

Determined to breathe on his own, LeGrand asked doctors to take him off of his ventilator in November of 2010. He said, “it’s not even whether you keep breathing, it’s whether you keep breathing how you want to breathe.”   A month later the strong-willed Legrand had lasted an hour and a half off of his ventilator. He continued to practice breathing without the use of medical equipment, and was independently breathing by January of 2011.

On January 6, 2011, Rutgers announced that LeGrand had regained movement in his shoulders and sensation throughout his body.

In July 2011 LeGrand  posted pictures of himself on his Twitter account – @EricLeGrand52 – standing straight up, with the help of a specialized metal frame, and announcing that he was slowly regaining movement and sensation in his arms. Overnight, he gained 12,000 new followers.

On Oct. 29, in spite of a snowstorm, LeGrand made his first post-injury entrance from the Rutgers players’ tunnel across the field to be with his teammates at the sideline.  His inspiring return to High Point Solutions Stadium won the Sports Illustrated’s Fans Choice Best Moment Award of 2011.

Eric has been recognized many times for the inspiration he is –

Eric has 2 dedications – to walk again and to do all he can to support spinal cord injury research.  He has partnered with many organizations such as the Christopher and Dana Reeve Foundation as Team LeGrand to help spread awareness, and raise funds for helping individuals living with spinal cord injury and their families by supporting quality of life initiatives and emerging therapies. For more info on Team LeGrand visit TeamLeGrand.org

He’s also the initiative behind the A Walk to Believe organization (http://awalktobelieve.org/) which holds annual spinal cord injury fund raising walks.  The 2015 walk raised over $82,000 to continue the work towards quality-of-life initiatives, therapies, and research for the more than 5.6 million people living with paralysis. A Walk To Believe is a non-profit organization originally founded in December of 2010 to raise funds to aid in LeGrand’s recovery. Since that time it has expanded the scope of its mission based on the inspiration of Eric LeGrand to include creating awareness and providing assistance for those suffering from spinal cord injuries as well as to raise funds for charities researching cures. Since its inception, A Walk To Believe has donated over $150,000 towards this cause.

“Whatever I can do I’m all for it because I want to get out of this chair and I know the 5.6 million people are dealing with some type of paralysis want to be able to have that able body again.”

It will be five years this fall since the former Rutgers defensive lineman took his last steps, and the rehabilitation process is showing signs of turning a corner. On Tuesday, LeGrand tweeted out a video showing him in his wheelchair moving slightly and stretching his back. This was unthinkable years ago in the immediate aftermath of his injury when it was feared he might never walk again.

Three times a week, two-hours each day, LeGrand goes for therapy at Kessler. When he’s not there, he continues his rehab at home. He remains undaunted in his personal belief that he will walk one day.

Using his Twitter account, Eric tweets out his latest news to his followers.  Recently he shared a video of his latest achievement – moving his back muscles – “We’re grinding man, getting this back moving. This is just another progress that I’m doing,” LeGrand said. “I like to update people every now and then, a few months ago. I really got a good lean-in and moving my back muscles and was like ‘Can you take a video of this?’ I think I need to post this and update everybody and show them how my muscles are getting stronger and things are still continuing to come back. Four-and-a-half years after my injury but things are still coming back, slowly but surely.”

Working on getting these back muscles stronger…little by little. Still as motivated as ever. Love ya’ll #bELieve  https://twitter.com/EricLeGrand52/status/590639686294642688?ref_src=twsrc%5Etfw 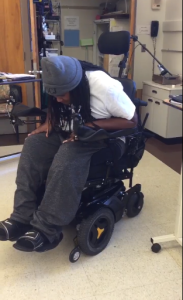 “You see everything being done in this world, all the research, all the different clinical trials – it just takes the money so we can keep trying these different things,” LeGrand said. “Now in 2015, I can just imagine what it’s going to be like in 2020, 2025, all the technology going on. It’s crazy to think, before I got hurt there was no Instagram, Twitter – I didn’t have a Twitter. I didn’t have an IPhone, I had a Blackberry and now look in four-and-a-half years, look at where technology has gone since 2010 to 2015. It’s unreal. So I can imagine what it’s going to be like if we can just continue to fund this so these doctors can go to work.”

Three times a week, two-hours each day, LeGrand goes for therapy at Kessler. When he’s not there, he continues his rehab at home. He is a strong determined young man who is slowly seeing the fruits of his focus and sharing them as an inspiration to all.  As Jesse Owens said:

“We all have dreams. But in order to make dreams come into reality, it takes an awful lot of determination, dedication, self-discipline, and effort.” – Jesse Owens, 4 time Olympic Gold Medalist