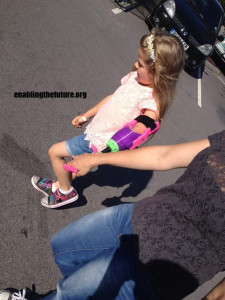 Stephen Davies, who is a recipient and tester of e-NABLE devices himself, traveled 200 miles round trip to deliver an **experimental design to his first recipient: an 8 year old little girl named Isabella, from Bristol UK.

The “3d Mechanical Hand – Maker Movement” was inspired by two strangers (a movie prop and puppet maker from the US and a carpenter from South Africa who has lost several fingers in an accident). They found each other via the internet and came together from 10,000 miles apart – to create a prosthetic hand device for a small child in South Africa …and then gave the plans away – for free…so that those in need of the device could make them for themselves or have someone make it for them.

Jon Schull, a research scientist based at Rochester Institute of Technology saw this “Robo-Hand” in a YouTube video and, in reading the comments, found that people were willing to use their own 3D printers to make these hands – again, for free.  He founded Enablingthefuture.org as a matching network for volunteers and recipients. What originally started out as a couple of guys who created something to help one child in need…has grown into a world wide movement of volunteer tinkerers, engineers, 3D print enthusiasts, occupational therapists, university professors, designers, parents, families, artists, students, teachers and people who just want to make a difference.  More than a match-maker, the organization has created a community which develops new designs for these prosthetics.  Today the community numbers in the thousands and has delivered hands in 37 countries.

These devices are especially helpful for children who do not normally have the option of traditional prosthetic device either due to cost, time, or due to the uniqueness of the limb difference. Individuals must have a functional wrist or elbow to make most current and recommended e-NABLE devices operate properly.  e-NABLE hands open and close using the flexing of the wrist or elbow to create the tension to pull the fingers closed.
This is little Liam from South Africa – riding his bike while wearing his most recent “Talon Beast” hand that was created for him. Liam is the first little boy to ever get one of these 3d printed hands and the child that inspired the first design! He’s gone from the original clunky metal prototype hand  to riding a dirt bike with a 3D printed hand – like a pro! 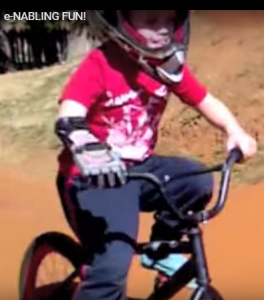 E-NABLE has a private Google+ Community which you can request to join and a public community with lots of inspiring videos of their work
If you would like to get involved, you can visit http://enablingthefuture.org/get-involved/