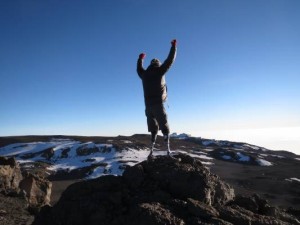 Brian Reynolds has been a bilateral below the knee amputee since the age of 4, due to meningococcemia.  That didn’t stop him from growing up active, constantly striving to exceed his last accomplishment.  He became an avid endurance hiker, through the trails of the Grand Canyon, Zion National Park, Yosemite National Park and the Inca Trail in Peru.  He’s climbed Mt. Kilimanjaro! The Mt. Kilimanjaro climb was just one of the many charity fundraisers in which Brian participates.  He raised $10,000 for Climb for Sight, the fundraising program of Vision for the Poor, providing needed eye surgeries for children in developing countries.   Brian was born in Boston, MA and moved to New Jersey last year, where he lives with his wife, also an avid hiker and runner.  He joined a Paralympic Track Club in NJ and has been training for sprinting in the hopes of making the 2016 Paralympics. Brian is now trying to win Runner’s World Cover Photo Contest.  Voting is open through August 26th.  He has Sunshine Prosthetics and Orthotics’ vote! 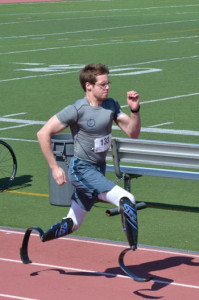 ” I run because I feel free”

Why does he run?  “It is pure freedom, joy and exhilaration. I like it because it was more than just a challenge, I never thought I could do it. I enjoy both the encouragement that everyone who passes me offers, just as much as I love to hear that I am inspiring and motivational just by doing what I love best. Through running, I have found a community of friends, neighbors, coaches and family who will always be a major part of my life. I run because I feel free. “I feel like I am flying when I am out on the roads or trails, every time I pull on my running legs is a reminder of what I never thought I could do. It is and it exhilarating and it provides a challenge every time, not only is it a physical sport it is a mental one. You have to be able to push through physical barriers and mental to achieve your best and I really like this dynamic.” What’s his training schedule like? “For mileage I do not actually run huge amounts of miles, I do a lot of high intensity low mileage training. The most I have ever hit consistently was about 30 miles a week. I do train most days though and use specific weight training to work my cardio and strengthen the muscles I use for running. Because I am an amputee running takes a much larger toll on the skin of my legs than it would for most people. Because of this I tend to not run more than 4 days a week. I have also recently been training with a high altitude mask on which seems to be working wonders!” What was his greatest obstacle growing up? “One of my main obstacles growing up was getting over my own self consciousness. I wore strictly pants until the age of about 21, if people asked about my limp I always made up some sort of injury or excuse, it wasn’t until I became more confident in myself and who I am that I truly started to flourish in life.” 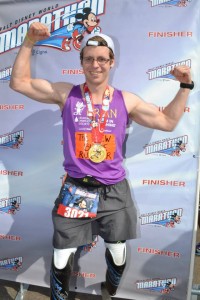