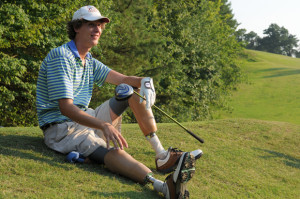 Jordan Thomas is an avid golfer

At the age of 16,  Jordan Thomas was washed overboard by a wave while he was preparing to scuba dive and it sent him right into the propeller.  He lost both legs below the knees. While still in the hospital, Jordan became aware of how lucky he was to have a family that could afford prosthetics and care and realized that something should be done for those children who did not have those resources.  Insurance plans often either do not  cover the entire cost of a prosthetic or may only pay for one during a lifetime.  Children grow and they need prosthetics replaced.

Twelve days after returning home from the hospital, Jordan and his family put together the Jordan Thomas Foundation  to provide prosthetics for children throughout their childhood and adolescence whose families could not afford them.  The Foundation soon became more – it was also an advocacy and support system.
Selling wristbands and T-shirts and holding events such as an annual golf tournament — Thomas is an avid and talented golfer — within 5 years, the Jordan Thomas Foundation had raised nearly $1 million. For U.S. beneficiaries, the foundation commits to buying them as many prosthetic limbs as they need until they reach age 18.

Jordan is much more than the Foundation’s Board of Directors’ President, he actively advocates for healthcare coverage for prosthetics as a procedure, as opposed to a piece of durable medical equipment.  (usually covered by healthcare insurance for a lifetime limit of a relatively small amount like $1,000) He has been to Capitol Hill several times to meet with Senators and Congress to speak about parity and also the need for in hospital rehabilitation for amputees. 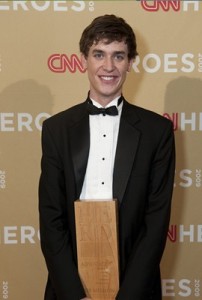 What else does this young man get involved in?  Jordan partners with the Amputee Coalition of America, a nonprofit resource center, to lead discussions and bring awareness about life as an amputee.  Amputee Coalition President and CEO Kendra Calhoun said the cap on insurance payments for prosthetic devices can have catastrophic implications for families. “We have heard that families have mortgaged their homes to pay for prosthetic devices for their child.”

Jordan has become a role model for tens of thousands of children with limb loss across the country. He speaks to civic clubs, community clubs and leadership conferences around the world (Dubai, Air Force Academy, etc). He started a partnership in Haiti to provide limbs to victims of the earthquake after receiving emails from around the world, asking him to lead the way for children in need.  In 2009, Jordan Thomas was named one of CNN’s Top 10 Heroes.

“I knew my life wasn’t over. And that situation just let me see how much better I had it than a lot of kids did, and it made me think about what I could do to help.”

To learn more about the Jordan Thomas Foundation, or to donate or refer a child or young adult,  visit  www.jordanthomasfoundation.org