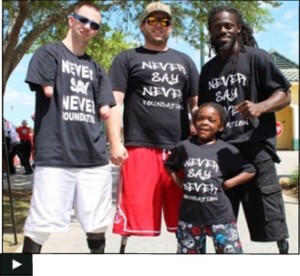 Founded by Regas Woods and Nick Stilwell , the Never Say Never Foundation is a non profit organization formed to help disabled youth overcome adversity with a positive attitude. Focusing on amputee athletes, their goal is to push the limits of adaptive sports and show the world that anything is possible!

Regas Woods is a bilateral above the knee amputee, born with a congenial anomaly that prevented the proper development of his legs.  After the amputation, he was told he would never be able to run, drive a car or even work.  His goal:  prove them wrong! 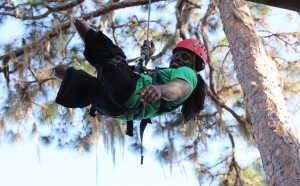 An adrenaline junkie, “Legz”, as he is nicknamed, is currently the fastest bilateral above the knee amputee in the world and ATV stunt rider, earning features on the TV show Superbikes, 2Wheel Tuner Magazine and Super Street Bike Magazine. Employed at a prosthetics & orthotics clinic where he is a full time O&P technician, Regas records and performs with his Gospel Hip Hop group on the side.

It was at the prosthetics & orthotics clinic that he met Nick Stilwell. 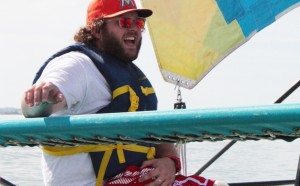 Nick lost both of his legs below the knee in a car accident in July 2008, forcing him to adapt to a new way of life. Nick and Regas met at his initial prosthetic appointment, where Regas actually fabricated his first pair of new legs. Regas helped to raise Nick’s spirits and proved to him that there IS life after amputation. He was walking again in less than 4 months and decided to devote his life to helping others overcome adversity.

During Nick’s recovery and rehabilitation, he realized the emotional hardships and financial strains that can be associated with limb loss.  Shortly after, he and Regas founded the Never Say Never Foundation to help children with limb loss emotionally, physically, and financially.

One of the sponsored events of the Never Say Never foundation is Pirate Camp! 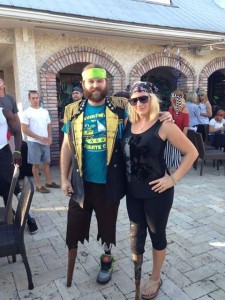 The Second Annual Pirate Camp was held the 2nd weekend in October.  Brooke Artesi, owner of Sunshine Prosthetics & Orthotics, attended as a mentor to the children. This weekend camp teaches disabled children, friends, and family, ocean appreciation, sailing skills, responsible boating practices and the importance of following your dreams. Upon completing each course, the soon to be swashbucklers move from swabs to first mates, ultimately graduating the weekend as Never Say Never Pirates. The camp not only provides certified sailing instruction but also ocean & environmental education, water sports, hands on activities, featured guest, games and more. The weekend concluded with an award ceremony and an afternoon of sailing.

Regas Woods and Nick Stilwell – 2 top athletes with a strong sense of paying it forward – inspirations.

To learn more about the Never Say Never Foundation, visit their website: NeverSayNeverFoundation.org or join them on Facebook.

Donations can be made online at NeverSayNeverFoundation.org/donate or by mail to: Never Say Never Foundation, 3965 NE 15th Court Road, Ocala, FL 34479