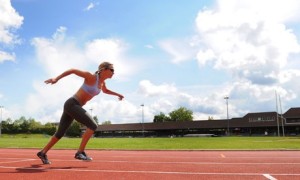 Sophia Warner is a 38 year-old wife, mother of two,  Commercial Director of British Athletics, and keeper of sheep, lambs, chickens and rabbits.  Sophia also travels around the country, speaking to children, employees and business people about the power of positive thinking.   She is an elite athlete,  a medal winning Paralympic 100m runner.  Sophia has Cerebral Palsy, the muscles and function of one side of her body are affected but certainly not her motivation and spirit.

In an interview by Kate  Carter for The Guardian, Sophia offered her training tip:   Find something you enjoy doing so it doesn’t feel like training.

Sophia began running in 1998 at the World Championships in Birmingham, England.  She won a gold medal and the cheers of the entire “crowd” of about 5 people.  Quite a difference from the nearly 3 million attendance records of the Paralympics of today.  Not only is there a great increase in fans, there are also large increases in the numbers of disabled athletes, including more opportunities at previously able-bodied-only events. 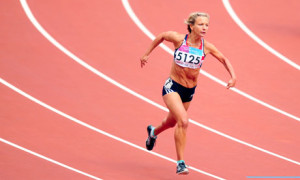 Asked about the legacy of the Paralympics, Sophia said:

“For me, I will be able to refer openly to my disability, which will offer a sense of liberation and pride in what I have achieved, not just on the track but also in my everyday existence. I think that all this will help the next generation, offering a better chance of understanding and acceptance…

“We are elite in what we do and if you are inspired or if we touch someone to stretch harder or think about what it is like to be disabled, then that is a bonus. First and foremost, I just want to be viewed and remembered as an incredible and talented athlete.”     The Guardian

Sophia Warner is an elite athlete – and an inspiration.

To learn more about Sophia and the Paralympics, you can watch an interview with Sophia on YouTube  or visit her website – www.sophiawarner.com.