Inspirations.
This is the first in our series of Inspirations – people who meet their physical challenges head on and build their strengths.

Giles Duley is a photographer. Starting as a fashion and music industry photographer, he became disenchanted with where his art had led him and found a calling in working with humanitarian groups – showing the world people who have faced adversity  and found their resilience. 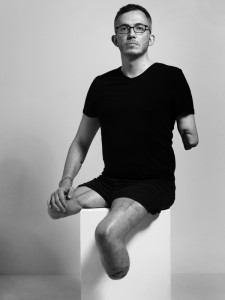 In 2011, while working with the 75th Cavalry Regiment, United States Army in Afghanistan, Duley stepped on an improvised explosive device. He was severely injured, losing both legs and an arm, as well as enduring severe internal injuries.

Two years later, in 2013 he returned to Kabul, and the Italian NGO Emergency Hospital, set up by Gino Strada, a charismatic surgeon with a humanitarian drive. He had worked with Dr. Strada before and now he returned and saw the adults and children through a totally different perspective. Not only because he could feel their pain and fright, but because he was now making his own adaptations to photographing again – using lightweight equipment which he could hold and focus and shooting at new angles because he could no longer bend into positions he had previously used.

Giles Duley is currently photographing for Ottobock at the Paralympic Games. (Ottobock, a well-known prosthetics manufacturer, sets up workshops at the Paralympics to make needed repairs to prosthetics of the athletes).  In an interview with The Observer,  Duley said about the Paralympics: “It is all in the name. These are the “parallel Olympics”, not trying to compete with the Olympics or to compare themselves. It celebrates the attributes and skills these athletes have.  It takes a certain bravery to live openly in a world that sees you as different. All these men and women are used to having the eyes of the world on them. Yet here they are showing not what makes them disabled, but celebrating what makes them unique.” 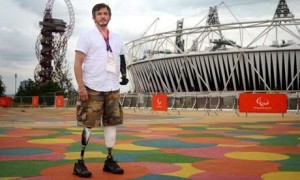 Observer photographer Giles Duley outside the Olympic Stadium. After covering the Paralympics, he plans to return overseas to continue his humanitarian photography. Photograph: Anthony Devlin/PA for the Observer

“I want to be defined not by what I’ve lost or what has changed but instead by who I still am. One day, if they write an epitaph for me, I hope it will not say I was a triple-amputee, instead just say that Giles Duley was a photographer. For that is what I am.”

To see photographs and interviews by Giles Duley, visit his website – www.GilesDuley.com